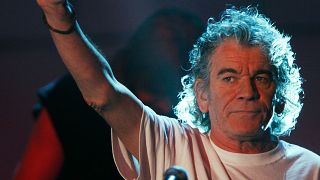 “This is the saddest announcement I ever had to make,” he wrote on the group’s Facebook page. “Maryann and the family have lost a wonderful loving husband and father, I have lost my best friend and the world has lost one of the greatest singers who ever lived. Too upset to say anything more at this time."

McCafferty was born in Dunfermline, Scotland, in 1946. The frontman co-founded Nazareth in 1968 with Agnew, guitarist Manny Charlton, who passed away earlier this year at the age of 80, and drummer Darrell Sweet.

Their self-titled debut album, released in 1971, failed to chart, as did its successor, 1972's 'Exercises'. Nazareth's first taste of success came with 1973's 'Razamanaz', which peaked at No. 11 on the UK singles chart.

The rockers' breakthrough came with 1975's 'Hair of the Dog', which spawned a Top 10 hit with a cover of the Everly Brothers' 'Love Hurts.' It later featured on several TV series, including That ’70s Show and Scrubs.

The album's title track was also a hit single and was later covered by Guns N' Roses in 1993.

McCafferty retired from touring in 2013 after 45 years with the band due to the effects of COPD (chronic obstructive pulmonary disease).

After McCafferty's decision to step away from Nazareth, the band continued to tour and record under the leadership of sole remaining founder member Agnew, with McCafferty's blessing. He was replaced by Linton Osborne, and later, Carl Sentance.

McCafferty talked about about his retirement to Classic Rock: "I could make another record, but getting up to do an hour and three-quarters, and get people to pay money to come and see me – I can’t do that.”

“If you can't do the job you shouldn't be there. Nazareth's too big for that."

He sang on all of the bands 23 albums until 2014 and also also released three solo albums during his career: his self-titled 1975 debut with the single ‘Out of Time’, Into the Ring in 1987 and his final solo album Last Testament in 2019.

Ricky Warwick, frontman of Black Star Riders and Thin Lizzy, was one of the first to pay tribute to the singer.

He wrote on Twitter: “Very sad to hear of the passing of Nazareth’s Dan McCafferty today. I was honoured to be in his company on the Rock Meets Classic Tour in 2016. My thoughts and condolences to his family and close friends.”

McCafferty is survived by his wife, Maryann, and two children.