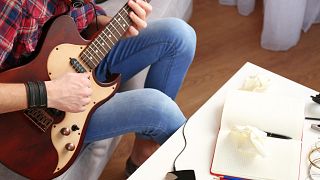 European musicians are demanding the rights to their music from major non-EU streaming platforms.

Songwriters and composers from EU countries are meeting with Members of the European Parliament today to express their concerns at the way video-on-demand (VOD) platforms are taking advantage of them.

Major US streaming platforms have regularly refused to give musicians the rights to their creations when contracted to work.

This means a songwriter for a show or film on a non-EU VOD platform wouldn’t have the copyrights to their music, stopping them from receiving any future royalties.

Instead, many of the platforms are demanding songwriters work on buy-out or work-made-for-hire contracts.

VOD platforms have become the most widespread way of people producing profitable film and TV content across the world. Disney+, Netflix, and Amazon Prime now have some of the biggest budgets for media enterprises of any studios.

The popularity of these platforms has opened up many opportunities for creators, but their dominance also means their practices can set industry standards.

Buy-out clauses have become widespread across VOD platforms contracts, giving authors very little choice but to accept if they want to work.

66 per cent of artists have been asked to sign away partial rights by VOD platforms, with 53 per cent demanded to sign away all of their rights, according to a European Composer and Songwriter Alliance (ECSA) survey.

“The issue is about fairness,” Helienne Lindvall, President of ECSA, said.

“Since refusing such buyout provisions is very difficult for composers due to the risk of being blacklisted. The options are either accepting the terms of a contract, however damaging, and thereby giving away the royalties they should be entitled to receive or losing the opportunity to work in a project handled by a very popular and dominant VOD platform and taking the risk of never working again for them.”

Because of the pandemic, VOD platforms are the most popular way of consuming audiovisual content these days. Combined with the likely financial impact the pandemic had on most artists, the reduction in ways to get remunerated for their work is highly unfair.

EU laws overruled by US contracts

There are EU laws which should make this practice illegal.

EU and national laws give authors exclusive right to their work and entitles them to royalties.

But while the EU and individual nations protect their artists, the rise of VOD platforms have forced artists to sign onto exploitative US contracts.

“To circumvent fair compensation requirements in Europe, US-based VOD platforms rely on the US laws and the jurisdiction of US courts,” Véronique Desbrosses, General Manager of The European Authors’ Societies (GESAC) said.

“The intervention of EU decision makers is needed to end this unfairness and ensure that internal market rules are applied to all players!” Desbrosses added.

Artists have also stated their displeasure at the unfair US contracts.

Irish singer-songwriter Eleanor McEvoy was one of many artists who celebrated when the new EU Copyright Directive was adopted in 2019 to protect artists.

“As European authors, we cannot accept that those rules are not being applied by the market’s dominant players simply because it does not fit their business model. Today, we need Europe on our side once more,” McEvoy said.

Last month, highly successful US Indie band Animal Collective cancelled their European tour due to it not being fiscally realistic with rising costs.

The band had hoped to tour the EU after years off the road during the pandemic. An internationally recognised band, their decision to pull the tour after years of lost revenue was a stark reminder of the difficulties musicians face making a career financially viable.

The exploitation of authors’ work without royalties is just the latest arena through which artists are taken advantage of in a global economy increasingly hostile to art.

New UK award coming for artists with a billion streams

Animal Collective cancel tour because of "the economic reality"