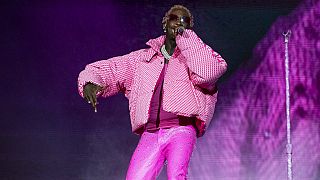 Atlanta rapper Young Thug faces trial over accusations that he participated in an illegal gang, based on evidence including his lyrics.   -   Copyright  Amy Harris/2021 Invision
By Anca Ulea  •  Updated: 03/11/2022

Megan Thee Stallion, Alicia Keys, Drake, 21 Savage and Coldplay have joined dozens of artists and record labels in signing an open letter that demands rap lyrics no longer be used as evidence against artists in US courtrooms.

“Rappers are storytellers, creating entire worlds populated with complex characters who can play both hero and villain,” the statement reads. “But more than any other art form, rap lyrics are essentially being used as confessions in an attempt to criminalize Black creativity and artistry.”

The letter, titled “Art on Trial: Protect Black Art” comes in the wake of a high-profile case against Grammy Award-winning rapper Young Thug, who’s accused of conspiracy to violate Georgia’s racketeering law and participation in a criminal street gang.

The case against the Atlanta rapper, whose real name is Jeffery Williams, relies on evidence that includes lyrics from nine of his songs, as well as social media posts and music videos. He and 27 other members of his record label Young Stoner Life were named in an 88-page indictment filed in May.

Among the lyrics cited by prosecutors are those in Williams’ 2018 song “Anybody” featuring Nicki Minaj: “I never killed anybody, but I got somethin’ to do with that body. I got the streets on my back (...) I get all type of cash, I’m a general.”

Williams’ lawyer says he is innocent of all charges. The rapper has called on his fans to sign a petition condemning the use of rap lyrics in criminal proceedings. When this article was published, the petition had more than 64,000 signatures.

“I always use my music as a form of artistic expression,” he said in an audio recording from mid-June. “And now I see that black artists and rappers don’t have that freedom.”

Young Thug is only the latest in a long list of rappers who have been prosecuted for their lyrics, a legal trend slammed by many in the music industry as a way to silence black artists and reinforce racial stereotypes.

Critics point to other genres of music that don’t face the same scrutiny. Johnny Cash was never accused of actually shooting a man in Reno.

A Problem Across the Pond

The practice goes beyond the borders of the United States. Rappers in the UK and France have also been targeted with legal action in the past over their lyrics.

When British drill rapper Unknown T, whose real name is Daniel Lena, was on trial for murder in 2019, prosecutors tried to use his lyrics as evidence against him before being blocked by a judge. The rapper was acquitted in 2020.

Another British drill heavyweight, Digga D, real name Rhys Herbert, was essentially given a gag order after he was found guilty for conspiracy to commit violent disorder.

After a trial where his music videos were presented as evidence, Herbert was sentenced to a year in prison and banned from releasing any new tracks that describe gang-related violence. The rapper must notify police 24 hours before he releases any new music, providing them with the lyrics.

In France, the godfathers of French rap Suprême NTM were found guilty of insulting a public authority in 1996 when police officers on patrol at their concert pressed charges against lyrics referring to them as fascists. And in 1993, the Paris public prosecutor called for an investigation over NTM’s lyrics in a song called “Police” that said “give me bullets for the city police, give me a gun.”

More recently, French rapper Orelsan, real name Aurélien Cotentin, went on trial in 2016 for inciting violence against women with his lyrics. He was acquitted after a court ruled in his favour, citing his right to "freedom of expression."

The judges in Orelsan’s case wrote in their ruling that rap is “by nature a type of expression that’s brutal, provocative, vulgar and even violent, because it claims to be the reflection of a disillusioned and revolted generation.”

Robberies & ransoms: Artists who have had their music stolen from them