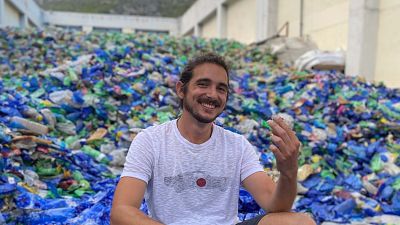 SCENES shines a spotlight on youth around the world who are breaking down barriers and creating change. The character-driven short films will inspire and amaze as these young change-makers tell their remarkable stories.

Lefteris Arapakis was born into a family of fishermen. For five generations, his family have been fishing the waters of Southern Greece. When Lefteris graduated from university in 2016, the country was still suffering from the 2009 debt crisis that plunged its economy into ruin. Unemployment was high and many fishermen had fled to find work in other European countries.

"I wanted to do something for the country and my father was complaining that they couldn't find enough personnel for the fishing boats. So together with a friend, we decided to start Greece's first fishing school," Lefteris told Scenes.

In 2016, he founded the non-profit organisation Enaleia to train unemployed people how to fish. Despite hailing from a long line of fishermen, Lefteris knew little about fishing. So he decided to spend a few weeks on a boat to learn the craft and design a curriculum. While onboard, it soon became apparent that there was a much bigger issue at stake.

“I was really shocked to see that the fishermen were collecting in their nets, not only fish, but lots of plastic,” the 26-year-old explains. “I still remember in our first catch, we got this bleached can of a soda drink. It expired back in 1987, so 30 years in the sea and as I was looking at it, the fishermen took it from my hand and threw it back in the sea, saying, ‘this is not our problem’,” he adds.

During his trip, the fishermen caught plastic bottles, plastic bags, even a refrigerator and a washing machine. All of the items were thrown back into the sea. "We realised there's no use getting more fishermen if we don't do something about it. So we decided to act," Lefteris says.

According to a 2019 report published by WWF Greece, plastic pollution in the Mediterranean region is expected to quadruple by 2050. Currently, 570,000 tons of plastic end up in the Mediterranean sea every year, with 33,800 plastic bottles thrown in every minute. The Ellen MacArthur Foundation predicts that by 2050 there will be more plastic in the ocean than fish.

In 2018, Lefteris launched Mediterranean CleanUp. A project that trains and incentivises the local fishing community to collect plastic from the sea. The organisation works with over 1,200 fishermen on 300 boats in 28 ports across Greece and Italy, assisting in removing over 18,000 kilos of plastic from the sea since the beginning of the project.

"We don't want to protect the environment at the expense of the people because I believe that will just lead to more illegal activities. We want to find ways with the fishermen that they can increase their income and they fish less," Lefteris explains.

The collected plastic bottles get sent to a fashion company in Madrid that converts them into clothes. According to WWF Greece, almost 20 per cent of waste found in the sea is abandoned fishing equipment. Lefteris has also teamed up with Netherlands-based non-profit, Healthy Seas to upcycle old fishing nets. Together with other nylon waste, they are regenerated into ECONYL®, the basis for new sustainable products, such as swimwear and socks. From the 45,000 kilos of nets collected by Enaleia from Greece, Italy, and Kenya, 585,000 pairs of socks have been made.

“If a young person from a fishing family of Keratsini can motivate thousands of fishermen in the Mediterranean Sea to collect plastic from the sea, then everyone can motivate their own communities,” he says.

Meet the inventor saving the lives of pregnant women across Uganda