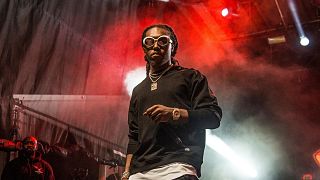 Takeoff, one of the members of the hip-hop group Migos, has been shot dead in Houston, aged 28.

The rapper was reportedly shot at 810 Billiards & Bowling, a bowling alley in Houston, Texas. Police were called to the scene after shots were fired at 2.30am this morning.

Takeoff, real name Kirshnik Khari Ball, was one-third of Migos alongside his uncle Quavo and his first cousin once removed Offset.

Reports of Takeoff’s death come from TMZ Hip Hop, which claims it was given exclusive footage of the shooting.

“We're told Takeoff and Quavo were there playing dice when an altercation broke out and that's when someone opened fire, shooting Takeoff ... either in the head or near his head. He was pronounced dead on the scene,” TMZ writes.

In the footage, which the TMZ article shows screenshots from, the entertainment news site claims Quavo and others tried to move Takeoff before putting him down to call for help.

Police have said two other people were shot and have been taken to hospital. Quavo was not injured.

Just hours before his death, Takeoff posted a selfie from the bowling alley.

Takeoff's primary cause of death was listed as "penetrating gunshot wounds of head and torso into arm" and his manner of death was called homicide.

Investigators are looking to speak with the 40 people who attended the party and fled after the gunfire, Houston Police Chief Troy Finner said.

At least two people discharged firearms, according to Finner. Two others were hit by gunfire but had non-life-threatening wounds and went to hospitals in private vehicles, he said.

Finner said Takeoff was "well respected," and there was "no reason to believe he was involved in anything criminal at the time."

Migos' record label, Quality Control, mourned Takeoff's death in a statement posted on Instagram. The statement said senseless violence "has taken another life from this world and we are devastated."

The bowling alley is in a three-story Houston retail complex with high-end restaurants and a House of Blues and is near a Four Seasons hotel.

Fans had created a memorial with roses, candles and a teddy bear on the first floor of the retail complex.

Takeoff was 28 years old and the youngest member of the Migos trio. Last year, the group released their fourth album ‘Culture III’, the final instalment of their Culture trilogy.

Migos formed in 2008 and quickly rose to prominence with their first single ‘Versace’ in 2013 and album ‘Yung Rich Nation’ in 2015.

They played fictionalised versions of themselves in the first season of Donald Glover’s TV series ‘Atlanta’ and have featured on the songs of other major artists like Lil Uzi Vert, Nicki Minaj and Drake.

They’re considered as one of the most influential rap groups in the trap genre, bringing the Atlanta-style to the mainstream.

"He was 28. Takeoff, the then-kid who convinced his uncle (Quavo) to start rapping then helped change the flow of rap. The undisputed best rapper in Migos (his uncle told me so himself just a few months ago). What a loss," Culture reporter Jewel Wicker wrote on Twitter.