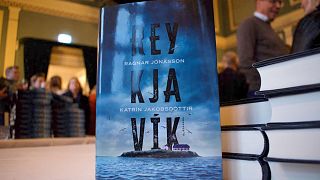 Entitled 'Reykjavik', the thriller was written with her close friend Ragnar Jónasson, the Icelandic bestselling author of the 'Dark Iceland' series.

The idea that a head of government would have enough spare time to write a novel may sound absurd in most countries, but not in Iceland.

The nation of 375,000 people has a strong tradition of reading and writing literature, with one in 10 Icelanders publishing a book in their lifetime, according to statistics.

"Obviously, this is not something that I thought I would have any time to do", says the 46-year-old prime minister at an event this week for the book's launch.

But it was "quite liberating to be working on this project during Covid", she says. "I don't have any other interests, this is my interest", she adds with a laugh.

And it's not a first for a serving prime minister either: Jakobsdóttir's predecessor David Oddsson published a novel in 1997 while he was in office.

What is the book about?

'Reykjavik' tells the story of a cold case involving a teenage girl who went missing 30 years ago in Videy, a small island near the Icelandic capital.

Valur, a journalist at a local tabloid, dives into the case to pick up the trail.

The events unfold in 1986, as Reykjavik celebrates its 200th anniversary, launches its first commercial radio and television stations, and hosts a historic summit between US president Ronald Reagan and Soviet leader Mikhail Gorbachev.

"We thought all of these events together would create the best background for a story", says co-author Jónasson.

Jakobsdóttir says she expects critics to be tough on her. However, she's confident she'll be able to deal with any harsh criticism.

"I think I can deal with that. I have experience as a politician, so it's quite okay," she said at the book launch event.

But Egill Helgason, who has hosted the book show Kiljan on public broadcaster RUV for 15 years, said he found the thriller "well written and well researched".

"It's a very pleasant read. It's somewhat reminiscent of Agatha Christie and the writers who don't have much violence in their books," said the TV host.

"This is a mystery, not a blood-dripping horror story," he added.

The novel was published in Iceland on 25 October and is set to be translated into several languages. It is expected to be out in the UK and the US in August 2023, and in France, Jónasson's biggest market, in the autumn of 2023.

Check out the video above to hear from Iceland's prime minister about why she decided to write the book.