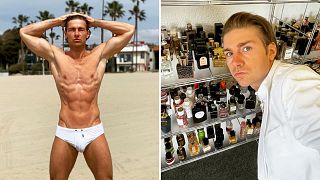 Jeremy Fragrance is not your typical influencer.

While most travel the world, recommend places to eat and give out fashion and lifestyle tips, Jeremy's content instead focuses on the world of perfumery and the power of scent.

Donning his trademark all-white suit (although a lot of the time he appears half naked) with his slicked back blonde hair, the 33-year-old German cologne connoisseur gives out tips, tricks and advice for those eager to learn more about fragrances.

While it may seem like a niche market, Jeremy has amassed close to 2 million YouTube subscribers and nearly 6 million TikTok followers, arguably due to his positive ethos, unrivalled confidence and eccentric personality.

Euronews Culture caught up with the self-proclaimed "number one fragrance icon" to find out more about where his journey began and how going viral changed his life.

A highway to fame

It was YouTube where Jeremy, born Daniel Sredzinski, first began to build his online presence.

He posted his first video to the site in 2014, comparing Jean Paul Gaultier's Le Male and Paco Rabanne's 1 Million, and it quickly started to pick up attention.

"The thing with creating fragrance content just came more or less by accident. My videos went viral and then I grew with it. It took two years for me to say, 'Ok, I'm the fragrance guy, I'm the number one'," said Jeremy.

While the majority of the self-taught perfume expert's content is based around fragrances and the art of smelling, Jeremy admits that it was never a long-standing passion of his, but more of a vehicle to success.

"I didn't have a big passion for fragrance, it was just a highway to fame for me. Arnold Schwarzenneger he also said it could have been something else for him than bodybuilding. Your talent finds you," reveals Jeremy.

And fame he certainly found. His videos started gaining millions of views and within a few years he became the most subscribed to fragrance creator on the platform.

Jeremy went on to launch his own online brand 'Fragrance One' in 2018, in partnership with his brother Kamil Ban and master performer Alberto Morillas, which has received strong reviews despite its incredibly high prices.

Without anybody even smelling the products, the Fragrance One team were able to pre-sell a record-breaking $1 million worth of sales through a kickstarter. The second largest campaign for a fragrance being around $60,000.

In recent years, Jeremy has also found great success on TikTok - or more specifically in the niche corner of the app known as 'PerfumeTok'.

As seen with the popularity of BookTok (content centred around books and literature), there is a market for almost everything on the short-form video platform.

With his 5.7 million followers, Jeremy has been able to connect with a new audience of fragrance enthusiasts, or perhaps those just entertained by his personality and sense of humour.

As Jeremy told Euronews Culture, "you do not need to be born in a lavender field" to smell good.

He recommends every person have three different fragrances, in order to suit every occasion and time of year.

"You can get away with just wearing one fragrance. However that fragrance won't be the best in the spring, summer, fall and winter," he says.

In a recent video on his TikTok account, Jeremy also explained the art of applying a fragrance - he recommends you use five sprays around the neck.

He then encourages people to apply two sprays - to the front of their necks and directly on the clothes - and a final spray on the back of their neck.

Check out the video above for extracts of our interview with Jeremy Fragrance, as well as some of his viral clips.

This perfume expert can recreate any fragrance with just one whiff

Are you a mosquito magnet? It could be your smell