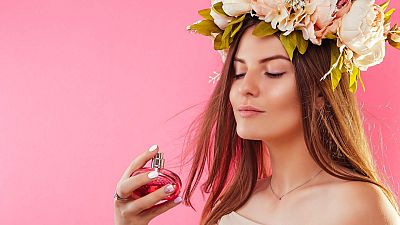 ‘Vabbing’ is the latest trend on TikTok. If you’ve not heard of it already, apologies for bringing it into your lives.

For the uninitiated, ‘vabbing’ is the portmanteau of ‘vagina’ and ‘dabbing’, and refers to people using vaginal fluid as perfume.

The idea came from TikToker Mandy Lee, who insisted it increased her success in attracting men. She’s since deleted the original post, but others have followed in her stead.

Ever since that TikTok post, the internet has gone mad for the trend.

Some people have expressed horror at using eau de vagina, while others have hailed it as a feminist power move which sees women embracing their natural odour instead of feeling shame.

The practice pre-dates Lee’s June 2022 post. Sexologist Shan Boodram used the term in 2019 in her book ‘The Game of Desire’ and in an accompanying YouTube video.

The theory behind vabbing is that female pheromones found in vaginal secretions are useful for attracting a mate.

Vabbing isn’t the first concept to use pheromones as a dating aid.

Smell Dating is a project by artist Tega Brain to match potential couples based on their natural odours.

Daters are sent a t-shirt which they wear for three days without using deodorant. The company then takes samples of the dater’s natural smell and matches them with another date based on the two liking each other’s smell.

There are also a huge number of pheromone perfumes available online.

But the science is not crystal clear.

“I am not sure if this is a fad, or perhaps I should say vad, but I seriously question the validity of the claims involved,” says Professor Dr. Erick Janssen of the Institute for Family and Sexuality Studies and Department of Neurosciences at KU Leuven.

Smell is important to human interaction. People have clear preferences over good and bad smells, especially when it comes to sexual partners. But this is different from the existence of pheromones.

“In animals, it has been clearly established that not only they exist but that they impact sexual and reproductive behaviour, and possibly partner preference and selection.”

But in humans there is still a lot of controversy about whether we can produce them or if we could detect them if they did exist.

To detect pheromones, many animals have a vomeronasal organ or VNO. It’s a sense organ just above the roof of the mouth in many lizards and snakes. It’s also present in mammals like cats and dogs.

“Pheromones are not things we consciously smell. They are possibly ‘detected’ by our VNO, but in addition to discussion about whether humans have a real VNO, there also is discussion, or at least there was, if it actually works, or is some evolutionary but now inactive left-over structure somewhere in our nose,” Janssen explains.

Although many humans have a VNO, there’s little proof that it has any remaining function after so many centuries of evolution.

“The VNO isn’t actually connected to the brain,” Mark Sergeant, senior lecturer in Psychology at Nottingham Trent University writes in a piece for The Conversation on the lack of proof for pheromones.

Sergeant points out that while some experiments in the 90s found proof the VNO could detect pheromones, the motives behind those results were troubling.

“The studies that claimed to show evidence of their effect on the VNO? It’s been pointed out that they had been provided by EROX – a firm with a commercial interest in patenting and selling them. You’ll find EROX and scores of other firms selling similar products on the internet today,” he writes.

The potential for humans to detect pheromones is unclear and somewhat unlikely. Say we could though, would those pheromones be present in vaginal fluids?

“Yes, vaginal secretions could cause attraction. But as probably many people, men and women alike, know the vagina is, like the penis, capable of producing odours that are not particularly enticing,” Janssen says.

There are also lots of reasons why a vagina may vary in smell - from bacterial vaginosis, yeast infections, to  the effect of one's diet on the microbial ecosystem.

But among the different smells emenating from your nether regions, are any of these pheromones?

“Not to my knowledge,” is the simple answer from Janssen.

“Personally, I can’t find a basis to give vabbing some kind of scientific stamp of approval,” he says, ruining the fun of TikTokers everywhere.

But Janssen suggests that not all hope is lost for the pheromone fans among you. Only that they would likely come from other regions of our body than our genitals if they did exist.

It’s a theory that is held by Dr Tristram Wyatt, a senior research fellow in the Department of Zoology at the University of Oxford.

While he recognises current evidence for human pheromones is weak, he is enthusiastic about continuing research, noting a recent French experiment where babies reacted to the isolated secretions taken from their mothers’ breasts.

“This pattern of secretion and response might point to human pheromones in action, from a mammary source. It is so exciting because if we detect pheromones from this, we will be more confident in finding others. It is a hopeful first step, but we need more investigation,” Wyatt told the university.

Lockdown love: How has the world been dating during COVID pandemic?