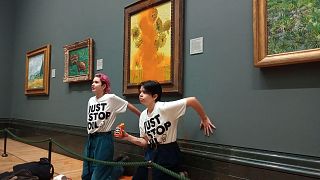 The painting, worth an estimated £72.5 million (approx. €83.4 million), is unlikely to be damaged from the incident, due its protective glass.

Both of the protestors have been arrested according to the Metropolitan Police.

Just Stop Oil activists have been blocking roads around parliament in London over the last few days. It's the 14th day of demonstrations linked to the group, which demands that the government should stop all new oil and gas licences.