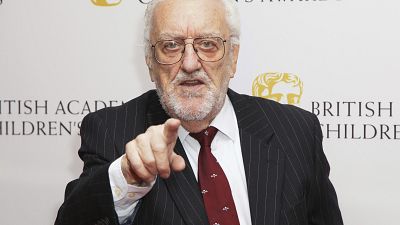 Beloved British actor Bernard Cribbins has died at the age of 93.

The veteran entertainer was best known for his iconic role as the station porter Albert Perks in the 1970 film “The Railway Children”, as well as the "Carry On" films and a notorious guest spot on "Fawlty Towers".

Born in Oldham in 1928 to a cotton weaver and a WWI veteran, Cribbins left school at 13 and worked as an assistant stage manager at a local theatre club, before serving an apprenticeship at the Oldham Repertory Theatre.

He steadily became a household name and a bone fide national treasure thanks to his success on the small screen with the children’s classic “The Wombles” (1973-1975), which he narrated. Further cementing him as a fixture in UK living rooms, he read stories in the treasured show Jackanory, from 1966 to 1991.

His other screen roles include Felix Forsythe in Alfred Hitchcock’s “Frenzy” (1972) and a memorable turn in the 1967 version of the James Bond adventure “Casino Royale”.

Cribbins skills extended beyond acting, as he also enjoyed success on the music scene with a number of hit novelty songs, including ‘Hole in the Ground’ and ‘Right Said Fred’.

In a career spanning seven decades, in 2007, he was introduced to a whole new generation of fans on the rebooted BBC series Doctor Who, playing Wilfred Mott, the grandfather of Catherine Tate’s companion Donna. Cribbins would go on to play the role until 2010.

He was already known to Doctor Who fans for playing the Doctor’s companion Tom Campbell in the 1966 film “Daleks’ Invasion Earth 2150 A.D.”

Cribbins remains the only actor to have played two companions on the show, and he was recently filming his return to the series alongside David Tennant and Catherine Tate for a 2023 episode celebrating the programme’s 60th anniversary. It is unclear how much he filmed, but this should be his final onscreen appearance.

Former Doctor Who showrunner Russel T. Davis led the tributes pouring in on social media by posting on Instagram, saying, “I love this man. I love him.”, while Charlatans frontman Tim Burgess posted a clip of one of Cribbins’ most famous moments on Doctor Who, a scene that punished the tear ducts of fans and casual viewers alike.

In 2011, Bernard Cribbins was appointed Officer of the Order of the British Empire (OBE) for services to drama.

His death was announced by his agent, and the cause of death has not been made public.