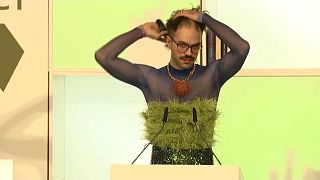 De l’Horizon, who was awarded for their debut novel, 'Blutbuch' ('Blood Book'), thanked their family and friends at the ceremony in Frankfurt, before stating that “this award is not just for me.”

The author - the first non-binary writer to win the award - then pulled out an electric razor.

“I think the jury also chose this text to make a statement against hate, for love, for the struggle of all people who are oppressed because of their bodies.”

The audience began clapping as de l’Horizon shaved their hair.

The prize is also “obviously for the women in Iran,” they said, in a show of solidarity with the Iranian women protesting for their rights, following the death of Mahsa Amini. The women in Iran have spearheaded nationwide demonstrations, removing their headscarves at protests and, in some cases, shearing off their locks.

“We should all look to Iran in admiration for this courage, this power,” de l’Horizon said. “It shows how stupid our worldview was that we thought femininity is only emancipated in the Western world.”

De l’Horizon’s novel features a nonbinary protagonist who interrogates their family history as their grandmother slips into dementia.

The jury stated that the book’s “every linguistic attempt … reveals an urgency and literary innovation.”

The statement reads: “With tremendous creative energy, the non-binary narrator of Kim de l’Horizon’s novel ‘Blutbuch’ (‘Blood Book’) searches for a language of their own. What narratives exist for a body that eludes conventional notions of gender? The fixed point of the narrative is Kim’s own grandmother – ‘Großmeer’ (literally ‘great sea’) in Bernese German – in whose ocean Kim risked drowning as a child and which they now swim free of through writing. The form of the novel is in constant motion. Every linguistic attempt, from vivid scenes to passages of essay-like memoir, reveals an urgency and literary innovation that challenged and inspired the jury.”

The German Book Prize honours the best German-language novel of the year and honours them with a €25,000 prize.

The other novels that were shortlisted for the award were: Fatma Aydemir for 'Dschinns', Kristine Bilkau for 'Nebenan', Daniela Dröscher for 'Lügen über meine Mutter', Jan Faktor for 'Trottel' and Eckhart Nickel for 'Spitzweg'.

Iranian climber who competed without hijab returns to Tehran