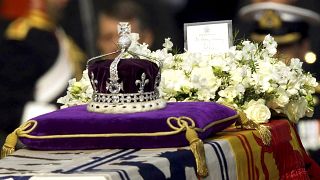 The Koh-i-noor, or "mountain of light," diamond, set in the Maltese Cross at the front of the crown made for Britain's late Queen Mother Elizabeth   -  Copyright  Alastair Grant/AP1952
By Jonny Walfisz  •  Updated: 15/10/2022

There might not be a jewel in the crown for Camilla, the Queen Consort, when her husband King Charles III has his coronation next year.

The jewel in question isn’t any old jewel. It’s the Koh-i-noor that sits at the top of the coronation crown that Queen Elizabeth II wore.

The Koh-i-noor diamond is one of the largest diamonds in the world, weighing 21.12 grams. In 1937, the diamond was put into the coronation crown for Elizabeth II’s mother.

But the history of the diamond is plagued with colonial inequity.

The Koh-i-noor was first mined from the Kollur mine in India. One of the first clear mentions of the diamond is a 14th century diary entry by Alauddin Khalji, an emperor who ruled over the Delhi Sultanate.

The diamond has gone through multiple Indian emperors’ hands, but remained in the region until it was acquired by the British Empire as a result of the East India Company’s conquest of India.

The diamond was surrendered to Queen Victoria in 1849.

Since then, it has been a mainstay of the British Crown Jewels.

“Most Indians have very little memory of the oppressive past. Five to six generations of Indians suffered under multiple foreign rules for over five centuries,” a spokesperson for India’s Prime Minister Narendra Modi's Bharatiya Janata Party said this week.

“Recent occasions, like Queen Elizabeth II's death, the coronation of the new Queen Camilla and the use of the Koh-i-noor does transport a few Indians back to the days of the British Empire in India,” they noted.

A source from Buckingham Palace told The Times that although no decision has been made, they would make a judgement based on the public mood.

“I would have thought they would err towards keeping India happy. The priority is the Commonwealth these days, and diversity. Those are the two very important things going on,” the source said.

Another source said: “They will be seeing how choppy the waters get, they will be gauging the reaction.”

The concern towards the Commonwealth is a pressing issue for Charles III after Barbados removed the Queen as its head of state last year and the other Caribbean nations consider doing similar now.

The original plan was for Camilla to be crowned with the Koh-i-noor when Charles III ascends to the throne on 6 May 2023.

If the palace opts against Camilla wearing the Koh-i-noor, there will be renewed calls for the Royal Family to return the precious diamond.

Beer and a boogie for Prince Charles and Camilla in Munich