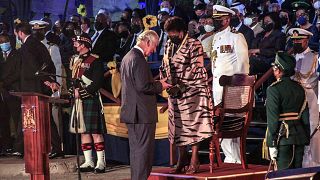 Queen Elizabeth II’s reign was brought to a close with the dramatic and ceremonial funeral on 19 September. While all eyes were on the late monarch, the day was also symbolic as the first chapter in the reign of a new monarch, King Charles III.

As constitutional monarchs, both of their reigns will be defined by the political movements of their eras. For Elizabeth II, her reign presided over the decolonisation of much of the British Empire and the establishment of the Commonwealth of Nations.

For Charles III, how will the picture of Britain’s global reach change as he sits on the throne. There are 56 nations in total in the Commonwealth. To this day, 14 of the Commonwealth nations still have the British monarch as their head of state.

Charles himself has already said he plans to have a "slimmed down monarchy" removing roles for minor royals - Prince Andrew springs to mind - and having a "shorter, faster, smaller, less highly-priced" coronation.

Goodbye to the Caribbean

There have already been some recent changes.

Last year, Barbados officially became a republic. Bajans felt it was important to remove the Queen as their head of state because of the historical impact the British slave trade had on them.

Charles, then still a prince, attended the transition ceremony and openly acknowledged role the British Empire had in slavery.

“From the darkest days of our past, and the appalling atrocity of slavery, which forever stains our histories, the people of this island forged their path with extraordinary fortitude. Emancipation, self-government and independence were your way-points. Freedom, justice and self-determination have been your guides,” the King said in 2021.

Dr James Chiriyankandath, a Senior Research Fellow at the Institute of Commonwealth Studies noted how it was one of the first times a British royal had made a statement of this kind.

For many Caribbean countries, the background of slavery and colonialism is a core issue of their identities. This was acknowledged by Charles,” Chiriyankandath says.

With the example set by Barbados, how will the other countries in the Caribbean with the King as head of state change?

“I would expect most of the states in the Caribbean to become republics within the not too distant future. I mean, probably within the next decade,” Chiriyankandath suggests.

The prime minister of Antigua and Barbuda, Gaston Browne, has promised a referendum on the country becoming a republic in reaction to the Queen’s death.

When Prince William and Kate did a tour of the Caribbean this year, the couple were met with protests in Belize and Jamaica’s prime minister, Andrew Holness told them the country would be “moving on” to become a republic.

“Especially for Caribbean nations in the 1960s, there was sort of a promise that keeping the monarchy as a symbol would maintain a kind of wider potentially economically and politically beneficial relationship to the UK,” considers Tobias Harper, Assistant Professor at Arizona State University.

“For the Caribbean and I think for New Zealand, Australia and Canada, that hasn't materialised. There's this constitutional point, but it's also sort of the nebulous promise of political relationships and I'm not sure how much keeping the monarchy has actually facilitated that,” Harper says.

Yet, the future of the Commonwealth nations outside of the Caribbean looks a little more inert in their republican interests.

New Zealand’s prime minister Jacinda Ardern recently said becoming a republic will happen, but it’s not a priority. “I don't believe that it will be quick or soon, but over the course of my lifetime,” she speculated.

Harper notes how the role of the monarchy in these Commonwealth states can be more political than its role in the UK.

There is an ambiguous relationship between the Commonwealth appointed governor-general of a country and its democratically elected leader can lead to controversial moments.

“From a British perspective, the Governor-General can exercise greater power than the monarch is supposed to,” Harper says, noting the apolitical role of the monarchy.

Beyond Australia, New Zealand and Canada, there are also the Pacific island nations such as the Solomon Islands and Tuvalu. With the Solomon Islands interested in gaining a closer relationship with China, they may also stop feeling the need to keep their head of state.

Will Charles III’s personality have any impact on whether the 14 Commonwealth sovereign states remain?

Chiriyankandath points out that it will be nigh on impossible for Charles to emulate his mother as their circumstances differ so greatly.

“By keeping out of the politics, she played a significant informal role as the head of the Commonwealth and that for the last few years she has been less able to do that as she became more infirm. That was also important in keeping the association between the monarchy and the Commonwealth going at a time when many people thought that it was anachronistic and had outdated its usefulness. He has a big task on his hands in terms of trying to keep that association,” Chiriyankandath says.

However, Chiriyankandath argues he doesn’t “think the personality of Charles is going to make much of a difference.” And that the choice to become a republic will largely be a historical matter on the behalf of the individual countries.

While Harper generally agrees, he notes that Charles has one significant difference from his mother that could sway things.

While Elizabeth II was discreet about her political opinions to the extent the public could project their values on her, “I don’t think Charles can do that, and his reputation is that he’s not like that,” Harper says.

“That makes it clear that the monarchy is acting in its own interests,” Harper adds. With this distinction clearer, the self-interested monarchy may rankle any swing voters if a referendum does come around.

So, one day in the future, the breadth of the monarchy’s reign may just be reduced to the UK. As Britain continues to adjust to its position as a post-imperial state, Chiriyankandath suggests that if one day countries like Australia become republics, “that could have an impact on this country.

“What has been till now a fairly marginal republican movement in this country, would have to engage in considering Britain’s constitutional monarchy and it’s continued significance,” Chiriyankandath says.