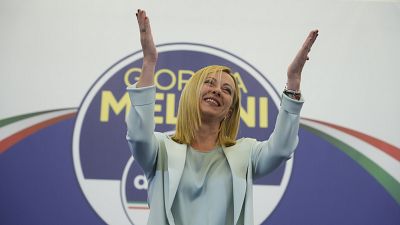 From the political shadows to the spotlight. Giorgia Meloni stormed to success in Italy's general election and is now the country's first female prime minister.

Since her victory on 25 September, Meloni-mania has taken over Italy, as supporters and critics applaud and attack the rise of her far-right Brothers of Italy party.

Her place in the history books is assured as Italy's first far-right leader since wartime fascist Benito Mussolini.

Meloni has made abundantly clear she's opposed to “LGBT lobbies”, “gender ideology” and "radical Islam" while she firmly denies being a “neo-fascist.”

Although Meloni's autobiography outlines her political ideology, she keeps many of her personal views close to her chest.

Euronews Culture searched to find out what Meloni likes and dislikes, in the realms of Arts and Culture, which experts say speaks volumes about her wider policies and beliefs.

Lord of the Rings as a sacred text

Leading up to the election, Meloni’s love of fantasy fiction attracted lots of attention across the media.

As reported by the New York Times, since her teenage years, Meloni, now 45, has had a passion for J.R.R Tolkien, a 20th-century literary titan and godfather of the fantasy genre.

On her Undernet profile, Meloni wrote in 1998 that Tolkien’s "Lord of the Rings" was her “favourite” book, though she also adored horror novels, especially those by Stephen King. She even reportedly had a stab at writing her own fantasy story as a teenager.

“I think that Tolkien could say better than us what conservatives believe in,” Meloni was quoted as saying by the US paper, which added that she viewed “The Lord of the Rings” as a "sacred text."

“The Lord of the Rings, unveiling strongly evocative political metaphors and powerful imaginaries of moral battles between right and wrong, is currently gaining a new wave of attention thanks to one of its prominent fans: Italy's premier-to-be, Giorgia Meloni,” she said.

“Tolkien’s work offers plenty of material for speculations on its possible appeal to the far-right and its leaders, keen to protect the integrity and values of an enchanted motherland from monstrous enemies," she added.

While Binenti was quick to point out that anyone reading Tolkien should not be “accused of obscure political intentions”, she says it was "interesting" to look at how the far-right has adopted such “mythologies to replace the censored symbolism of fascist cultural expressions.”

Certain fascist symbols, such as the Nazi flag, are banned in Italy and many more are socially condemned. This has led the Italian far-right to co-opt other symbols and narratives into their cultural project.

Tolkien himself was not pro-fascism, though a conservative, and was critical of the Nazis and their racial theory.

In 1938, a German publisher asked him if he was Ayran to which Tolkien famously replied: “If I understand correctly, and you are asking me if I have Jewish origins, I can only answer that I am sorry that I have no ancestors of those gifted people.”

Beyond books, Meloni has “relatively non-descript tastes that fall within mainstream culture,” according to Professor Piero Garofalo, an expert on Italian culture at the University of New Hampshire in the United States, although he adds that having “a somewhat generic cultural repertoire is also a political strategy to appear relatable to most people.”

He told Euronews Culture that Meloni's prefered music is by popular Italian singers of the 1970s and 80s, such as Lucio Battisti and the late Rino Gaetano, alongside folk.

Many of Brothers of Italy political rallies have opened and closed with Gaetano’s music, which his family has criticised.

“Meloni has been critical of John Lennon’s song “Imagine,” says Garofalo, “which she describes as beautiful as long as you don’t speak English because she sees it as a hymn to global homogenisation.”

Her dress sense is also a topic of interest, as is typically more often the case for female politicians compared to their male counterparts.

“Over the course of her career, she has toned down her fashion so as to appear in touch with everyday folk,” Garofalo told Euronews Culture. “Her jewellery is low-key: she is usually sporting an Apple Watch or a Fitbit or a bracelet (in the colour of the Italian flag).”

In 2018, Meloni was criticised for having designer bags by Calvin Klein and Louis Vuitton, with critics saying they made her seem out of touch. Since then, she mostly been seen sporting “Made in Italy” bags from lesser known brands.

"Increasingly, she has avoided wearing black to prevent facile references to fascism,” he added.

All for one, and one for all

Meloni is reportedly a bit of a sports buff too, liking rugby in particular, according to the Italian sports paper Gazzetta dello Sport.

When she was Minister for Youth between 2008 and 2011, Meloni gave an interview to Diego Dominguez, a former Italian-Argentinian rugby player, in which she discussed why she loves the sport.

“In rugby all the players on the pitch are protagonists, but there is no room for exaggerated individualism to the detriment of the collective,” Gazzetta quotes her as saying.

“Above all, rugby teaches that great difficulties, however insurmountable ... may be overcome if the whole team fights together for the same goal.

So what about Meloni’s party?

A spokesman for the party, Federico Mollicone, has said the country’s Ministry of Culture is set to “become one of the strategic cornerstones of the government.”

They have proposed measures to promote Italy’s rich culture, art and history, through cutting VAT on cultural services, reducing ticket costs in museums, expanding UNESCO heritage sites and supporting restoration and renovation projects, alongside stronger measures against those who “damage heritage”.

While these policies are praised by some political pundits, others have voiced their concerns.

One Italian researcher in race politics, who wished to remain anonymous because of previous threats from far-rights groups aimed at them, told Euronews Culture that the Brothers of Italy's programme was focused on "nationalist understandings" of culture and Italy’s past.

“The manipulation of history has been a very successful strategy of all reactionary, conservative and often totalitarian regimes,” they said. “Meloni is using this, just like Trump's Make America Great Again slogan, by alluding to a 'better past' that we need to reclaim.”

Meloni and her party repeatedly say they are a moderate political force and have said they are cleaning up their more extremist fringes.

Brothers of Italy “is the party of Italian Conservatives,” Meloni told Euronews on Monday. “We are a modern governmental right wing.”

How exactly Meloni and her party’s cultural policies will play out remains to be seen.

Scotto di Vettmino, a researcher at the University of Exeter, says in the run-up to September's election Meloni tried “not to touch” on cultural issues, especially more controversial topics like sexuality, family, religion and migration.

“These cultural issues were sort of avoided during the campaign,” he said. “But that does not mean people do not know what this party stands for.”