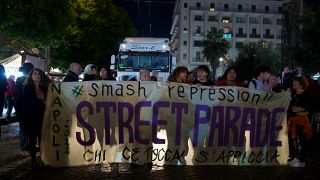 The whir of mopeds and the honking of passing cars that usually fills the streets of Naples was replaced this weekend by techno music blaring from rented lorries.

An estimated 5,000 people took to the streets of the southern Italian city to protest against the partial passing of the so-called anti-rave law.

Opponents argue that it is a direct attack on people’s freedom of expression. They fear the measure could be used to go after anti-government demonstrators and occupied leftist community centers in addition to rave parties.

The law, which has already been passed by the Italian parliament, would criminalise unauthorised gatherings that “arbitrarily invade land, buildings of others, both private and public, in order to organise a musical gathering or other entertainment purposes.”

Those found guilty of participating in such events could face hefty fines and between one to four years in prison. The heaviest punishment would be levied against organisers who could face up to six years in jail if the event is perceived to be a risk to public safety.

Fight for the right to party

Sergio Sciambra, a 30-year-old law student and member of the musical and arts collective Nadir says that the basis of this law goes further than just stopping or preventing rave parties. He believes that it is a way for the right-wing government to impose their version of morality on people.

“Raves are essentially a symbol of what is wrong according to governments like this one but also the governments of the center left” explains Sergio. “These are ‘morally scandalous’ things like substance use, aggressive music and promiscuity.”

Ideas of morality have been at the forefront of Italy’s new right-wing government headed by Giorgia Meloni’s Brothers of Italy party, which has its roots in the country's post-fascist political groups like the Italian Social Movement.

Despite Meloni’s efforts to distance her party from its past, the relationship between its current political beliefs and those of the original fascist party are not lost on political opponents.

About halfway though the march in Naples, the parade made its way though Piazza Matteotti. A square intentionally named after a famed anti-fascist in a location surrounded by fascist-era buildings.

The caravan of trucks shining lasers into the crowd and blasting techno, house and reggae music stopped in the square long enough for people to spread out and dance. The black steps of the central post office building became a dance floor where groups of young people jostled, bobbing and swaying their heads to the music.

The movement for music

31-year-old techno fan Elena Lucariello jumps up onto a raised section next to the post office stairs and immediately starts dancing. Her platform boots bounce up and down as she holds a beer in one hand and a small camera in the other.

“Music is something that unites everyone, not just techno, but all music” says Elena. “It gives you the ability to express yourself. The expression of one’s self though music is something that bothers conservative leaders because it’s uncontrollable. It was the same story with rock and roll in the 1960s and even jazz before that.”

She explains that these techno raves and parties give her the opportunity to build deep bonds with other people who share her same interests.

“These parties let you feel intimately connected to other people. It lets you get out of this daily routine that we all have and we must have time to dedicate to ourselves and our own expressive interests.”

The catalyst for this recent push to criminalise rave parties came after a free rave party was shut down during Halloween weekend in November. The rave was attended by around 3,000 people on the outskirts of the northern city of Modena and was shut down without any major confrontation with the police.

Sergio explains that punishments for being in violation of the new law are heavy handed given the alleged crime being committed.

“It’s a bit of a terroristic law” he says. “The real point of it is to scare people.”

Rallying to the cause

The high fines and long jail terms that would be levied against both participants and organisers of rave parties and other similar events has grabbed the attention of European human rights organisations like Article 19.

In a statement released in November, Article 19 warns that such a sweeping law could potentially allow for the criminalisation of other constitutionally-protected activities and they have urged the Italian government to immediately repeal the law.

Prime minister Meloni has tried to reassure the public that the law will not target protests and that she won’t deny anyone the right to dissent.

This attempt to settle fears of the law being used to target left-wing groups was dismissed by a fellow Brothers of Italy MP Federico Mollicone. In a TV talk show interview, he threatened that certain left-wing social centers could be targeted if the occupied space is seen as detrimental to public or private property.

The true implications of the law are yet to be seen as it still must be approved by the Senate in the coming weeks. For the organisers of raves and other events that are at risk of becoming targets, a mood of determined resistance has been set.

“The important thing is just to do it” says Sergio. “To put in practice one's own culture and values is the best possible form of resistance.”

Cultural choices: What do we know about Giorgia Meloni?