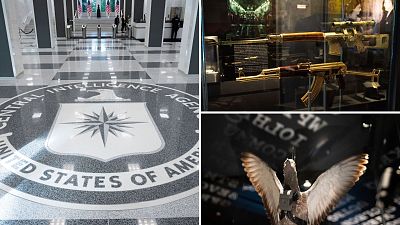 Pigeon spy cameras, disguise kits, exploding martini glasses... These are only a few of the unclassified secrets hidden away at the CIA Museum, inside the agency's Virginia headquarters.

The US' Central Intelligence Agency's collection is closed to the public and access is generally limited to the agency's employees and guests - making it one of the most exclusive and secret museums in the world.

However, the CIA recently allowed a number of journalists to tour their in-house museum, newly refurbished in time for the agency's 75th anniversary, as part of a broader effort to showcase its history and achievements.

Through photos, historical artefacts and reconstructions, the museum tells the stories of some the CIA's most famous covert operations, including the Berlin Tunnel, the Bay of Pigs Invasion and the capture of Saddam Hussein.

What's inside the museum?

Around 600 historical items, from gadgets, to weapons, to CIA memorabilia are on display at the museum.

You wouldn't be surprised if a few of the gadgets at the museum featured in the next James Bond film.

A hidden camera inside a cigarette packet, an exploding martini glass, a pigeon with its own surveillance camera, an underwater fish named Catfish Charlie used to take water samples undetected - the list goes on.

Also on display are a number of personal items once belonging to former Iraqi dictator Saddam Hussein, including a gold AK-47, a Ruger M77 bolt action rifle, and the leather jacket he was wearing when he was captured by American forces.

The mission that captured Saddam Hussein was called 'Operation Red Dawn', carried out by Task Force 121, which included members of the Delta Force and CIA associates.

In the museum, there are also items which were used to build the cover story for a fake movie called 'Argo', as documented in the 2012 Oscar-winning film, Argo.

The made-up film was masterminded by CIA legend Tony Mendez, who helped the rescue of six American diplomats from the 1979 Iran hostage crisis, by disguising them as a Canadian film crew.

The most recent addition to the collection is a model of Ayman al-Zawahri’s safe house, used to brief President Joe Biden about the al-Qaida leader’s whereabouts before the agency killed him in a drone strike in Afghanistan.

Shortly after al-Zawahri's death, White House officials released a photo showing Biden talking to CIA Director William Burns with a closed wooden box on the table in front of them.

Now, the contents of the box - a model depicting a white-walled home with at least five stories and three partially obscured balconies is being showcased at the museum.

On display near the model of al-Zawahri's home are seven stars honouring the CIA employees slain at Khost.

A scale model of Osama Bin Laden's compound in Abbottabad, Pakistan, used during the raid that killed the al-Qaeda leader, is also on show.