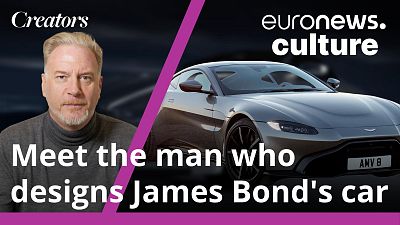 As the Chief Creative Officer of iconic sports car manufacturer Aston Martin, Marek Reichman is responsible for designing every detail of some of the world’s most exclusive and recognisable cars.

If that isn’t cool enough, he also gets to work closely with the James Bond film franchise, with four Aston Martin cars featured in the recently-released blockbuster No Time to Die, Daniel Craig’s final appearance as 007. Reichman and his team have even designed a car, with real gadgets, specifically for Bond.

“My role, the team's role, is to make sure when you see an Aston Martin, the relevance of 108 years of history, Formula One racing, La Mans wins, James Bond: it's evident in the object that you see,” said Reichman.

For the industrial engineer, ideas can come at any moment, he can’t schedule ‘creative time’ in his diary.

“You know, if the hairs on the back of my neck stand up, whatever it may be: art, photography, music, dance, a sculpture or an exhibition, a film, a race, a car. Then if I'm at that moment inspired, I'll try and get it down on paper as quickly as I can.

"The creative process...always for me, in my process, starts with a sketch. The fastest way to get an idea from your brain to someone else's eyes is to sketch it. It is to draw it. Pen to paper. it's absolutely relevant today, despite all the augmented systems that we have."

It takes around six months for the Aston Martin design team to go from an initial sketch to a working concept car and around 3.5 – 4 years for a full production car.

Getting to that stage takes teamwork from both the design and engineering department says Reichman: “I've always described being Chief Creative Officer as being the conductor of a brilliant orchestra.”

In this episode ofCreators, a series where we get inside some of the world's top creative minds, Marek Reichman tells us about his creative processes, his close relationship to the James Bond films, and how he leads one of the world’s emblematic brands.

How to make a perfume: meet ‘nose’ Patricia de Nicolaï