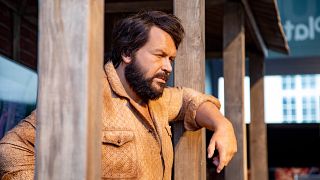 Christina Lutze isn’t just a fan of actor Bud Spencer, who died in 2016. She practically grew up with him.

“My dad bore a resemblance and my family pretended he was Bud when I was a toddler,” she says. “My first day at school, I introduced myself this way: ‘My name is Christina, my mom is a housewife, and my dad is Bud Spencer.’”

Lutze believed her dad was the Italian actor (born Carlo Pedersoli in Naples in 1929), until her teens - thinking he went to set every day to shoot a movie.

Naturally, she was in Berlin on 27 June 2021, the opening day of the Bud Spencer Museum on the city’s famous Unter den Linden street. Positioned halfway between Brandenburg Gate and the tourist site of Museum Island, it’s a prime location.

“I was overwhelmed by the loving yet professional presentation, I feel Bud himself would love this exhibition,” notes Lutze, who lives in Gottingen, about 350 km southwest of Berlin. “It should stay permanently! I think all the love and work of the contributors and the [Pedersoli family] should not be lost. I’m planning another visit this year.”

The temporary museum is divided into three rooms: a large cinema space with a 20-minute film presentation about Bud and two other mid-sized rooms that attest to his life and career.

Spencer was Italy’s 1949 100-metre freestyle swim champion. He gained four national titles in the 1950s and participated in the Helsinki and Melbourne Olympics. Between his film and TV gigs, he also learned to fly, established a small airline, made records, and penned four books about his life and his personal philosophy.

Every Saturday, there’s a Bud Spencer film screening, and the shop has various t-shirts and souvenirs dedicated to the actor. There are even two Bud Spencer whiskeys for sale, made by a distiller in Bayern. All proceeds are shared with the family.

Spencer’s son and two daughters attended the opening: “They were overwhelmed with emotion and cried because it brought up memories of their father,” says museum director Matteo Luschi.

The museum attracted 35,000 visitors in the first six months, many from Germany, Italy, and Hungary and all over Europe as well as some from as far away as Pakistan.

“Bud Spencer transcends all cultural and generational limits, he makes adults and children laugh. His films were about defending the weakest in society and the joys of friendship,” declares Luschi. A transplanted Italian who has lived in Germany for 20 years, Luschi often gets asked by his countrymen why the museum is in Berlin. “The German fan base is very big and well-organized.”

Standing up for the little people

The seed was planted in Italy at a 2019 four-month Bud Spencer exhibition held in his hometown of Napoli. It’s where Luschi and curators Eric and Dennis Heyse met up with the Pedersoli family and hatched a plan for a special exhibition in Berlin.

While many fans are pushing for a permanent exhibition, the museum’s management only made an agreement with the family until the end of October 2023.

“Our intention is to stay as long as possible,” says Luschi. “If the Pedersoli family are open to it, maybe the exhibition could be extended another few years and done in a different way. It’s really hard to say right now.”

The Heyse brothers, twins who volunteered to curate the exhibition, say the lure of Spencer’s films is that they often have simple lessons about life: loyalty, friendship, fighting bad people, and having fun. They recall enjoying the Bud Spencer movies as children, watching TV on their godmother’s couch after school. The pair run the Bud Spencer / Terence Hill site - a tribute to Spencer and his equally famous co-star.

“He was a huge man, and his character was always good to good people and there was always a big brawl,” the brothers say with big smiles, speaking over each other. “The dialogue was quite funny. The German dubbers would be creative and make new lines. Sometimes, you’d see the back of Bud’s head, but the dialogue would continue.”

Moreover, the films have special meaning in the former GDR, where few films from the West were allowed.

“I think it’s because they always fight for the little people, they were against big industry or industrialists,” reflects Eric Heyse.

Spencer quit swimming in 1957, going on to appear a variety of movies, mostly in minor roles.

His breakthrough came in 1967 in Giuseppe Colizzi's Spaghetti Western, God Forgives... I Don't!, in which he was partnered with Mario Girotti (Terence Hill), one of the Italy's highest-paid actors at the height of his popularity. The film was a huge hit in Italy and when it came to international distribution, Carlo Pedersoli was asked to take on an English alias. Pedersoli combined the name of his favourite beer - Budweiser - with his favourite actor - Spencer Tracey.

Colizzi knew he had struck gold with the duo and proceeded to make two more Westerns: Ace High (1968) and Boot Hill (1969).

The pair hit their stride with the director Enzo Barboni, who played up the Laurel and Hardy interaction between Hill’s lean, nimble character, and portly Spencer’s grumpy personality. The 1970 movie They Call Me Trinity and the sequel Trinity is Still My Name were worldwide hits.

Spencer and Hill went on to star in another 17 films together. Their final on-screen appearence together was in 1994’s Troublemakers (also known as The Fight Before Christmas), directed by Hill.

Spencer starred in other blockbuster movies on his own - most memorably Flatfoot and its three sequels, as well as Uppercut and Banana Joe - which were not Westerns.

“His films invite you to escape from everyday life and dream a little,” says Lutze. “You can be sure there will be a happy ending.”

The museum is a testament to his varied interests: Spencer’s swimming and movie trophies, his swimmer’s robe, unique recreations of vehicles from famous movies, his records, pilot’s license, and marked up scripts.

What the Heyse brothers treasure most are Spencer’s passports: “He filmed in almost all the continents,” say the Heyses, who take great pleasure when seeing a timeline of Spencer’s life through passport stamps.

A piece of European pop culture

Currently, the Bud Spencer Museum is raising funds among fans to recover about €10,000 lost during the winter months of 2022 when the Omicron variant kept many from venturing to Berlin and to the museum. Luschi says summer numbers are back up and that he is certain the museum will operate until 31 October 2023... Which happens to be Spencer’s birthdate.

The museum’s management is also focused on next year’s Spencer Hill Festival in July, an annual tradition since its inauguration in a movie theatre in Hameln, Germany, in 2001. Participants have ballooned from 150 at the first gathering to about 4,000 in 2019 in Lommatzsch, where there is a small Terence Hill Museum within the town’s historical exhibition. The town, northwest of Dresden, is where Hill’s German mother is from and where he lived briefly as a child.

There are also plans for the festival to be held in Italy, in the town of Gubbio where Hill, now 83, made the TV series Don Mateo. Five thousand tickets are available, and it will be the first time the festival is held in Italy.

Meanwhile, the Heyses are hopeful they can retain a Bud Spencer presence in Berlin: “We have so much more we can feature in the exhibit.”

Luschi says the team is always discovering other objects connected to the actor. They recently found the original carriage featured in Troublemakers: “This place is like a mecca for fans. It’s also an important tribute - a piece of European pop culture.”

As for Lutze, she is looking forward to seeing the carriage, among other things. And while the possibility of the exhibition staying beyond 2023 still remains a mystery, she maintains an attitude her hero would be proud of: “His life motto, ‘Futtetenne,’ is a tattooed on my arm."

Roughly translated, 'Futtetenne' means 'Don't give a f**k about it'.

"It reminds me not to take everything too seriously, including Bud himself.”

On the road to find action-comedy hero Bud Spencer