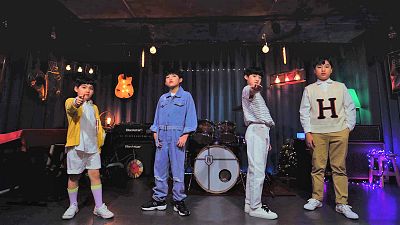 Music has always been a part of Lim Hee Seo's life. He comes from a family of singers, songwriters, conductors and music teachers. As a result, he developed the confidence and opportunity to explore music independently.

"About three years ago, I was introduced to K-pop for the first time. As I listened, it seemed that the genre matched my taste and was thrilling. I listened to it while working out and shared it with my friends. Then my friends started to listen to it too," the 13-year-old said.

K-pop is a musical genre that began in the early 1990s and has since become a global phenomenon. A definition of K-pop is "Korean popular music" that encompasses a wide range of musical styles and elements. As well as Korean pop, it can include hip-hop, electronic and rock music.

"K-pop is unique. It is different from pop music in other countries as it has Korean culture. I love it. It makes me feel really excited inside," Lim Hee tells Scenes.

One of the most successful K-pop groups is a boy band called BTS. According to Cosmopolitan magazine, the famous pop group, also known as The Bangtan Boys, has produced nine studio albums and has won numerous music awards. The group has millions of devoted young fans worldwide, and Lim Hee is one of them.

"K-pop stars like BTS are not only famous but also great people. They give people warm and joyful feelings. So, I think they are wonderful and cool," he says.

Seeing Lim Hee's interest in music growing, his mother encouraged him to participate in local music events and festivals. At a teen music festival in Seoul, he met a music producer who complimented him on his singing voice.

"He complimented my son's voice saying that it was clear and elegant," explains Lim Hee Seo's mother, Won Min Suk. "He suggested that my son should try K-pop. I thought it would be great for him to experience more musical activities," she adds.

The birth of the band

Whilst at the festival, Lim Hee met three other young K-pop enthusiasts, and they decided to form a boy band. With the help of their parents, they agreed on the name 'RE Kids Dream' and their dreams of musical stardom began.

"In our group, the members are me, Hyun-ho, Ha-el and Min-Seong. We have created several songs so far, some of which include 'Dreaming Way' and 'Like a Movie'," he says.

The group practice together twice a week with the help of a vocal coach and a dance teacher. The boys rehearse in a studio in the capital city of Seoul, the birthplace of this music genre.

"I see that they really enjoy practising. The children don't do it because someone asked them to, they do it because they love K-pop. Even though they are sometimes shy, I can see performing gives them confidence," says Won Min Suk.

The group's first music video, 'Dream My Way', has received positive feedback since it was released online in September 2020.

"My family, including my mother and father, were very proud of me. They complimented me for working hard. Even my teacher played our music video at school and boasted about it," recounts Lim Hee.

Won Min shared her son's music videos with her friends and colleagues and organised a party to celebrate. "It was truly impressive. Seeing his music video gave me a healing sensation. It was so uplifting to see their energy and passion," she says. "Everyone had something supportive to say. I feel fortunate that many people encourage them."

Lim Hee Seo's Father, Lim Byung Hoon, believes that being part of the group at such a young age will not harm the boys.

"They are listening to and making music that they like. I don't know how far they will go with it in the future. They're enjoying the music and creating good memories. As they grow up, this experience will have a good influence on them," says Lim Byung Hoon.

Although Lim Hee is still in school, he and his bandmates hope to become Korea's most famous K-pop group. They dream of achieving success like their favourite K-pop idols and want to spread positivity worldwide.

Meet the choir singing a chorus of diversity in Qatar