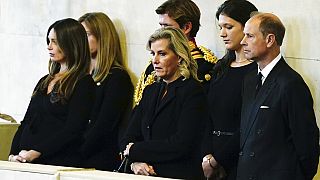 On Monday September 19 2022, Britain's Queen Elizabeth II, arguably the most famous person in the world, will be laid to rest in a state funeral.

With the eyes of the world turning to watch, it's being heralded as one of the most important funerals of the century and the end, for some, of a post-war era.

It will also be the first state funeral in the UK since war-time Prime Minister Winston Churchill died in 1965.

But what is a state funeral? Who will attend?

What is a state funeral?

A state funeral is quite literally a funeral paid for by the state, meaning of course the British taxpayer. Despite the economic difficulties sparked by the cost of the living crisis, this will be a grand affair which adheres to strict protocols, honours tradition, and you can expect a fair amount of pomp and pageantry.

State funerals in the UK are reserved for sovereigns, all of whom except for the Queen’s uncle Edward VIII, who abdicated, have had one.

Other notables from the UK who have had state funerals include the polymath Isaac Newton and Vice-Admiral Horatio Nelson and the Duke of Wellington both of whom won decisive victories for the British in the Napoleonic Wars.

A state funeral is organised under the care of the Earl Marshall who, on the death of a sovereign, must formally inform and invite members of the houses of Parliament to the event. If the funeral is for a distinguished citizen, members are invited by the sovereign of the day.

State funerals begin with a ‘lying in state’ where mourners can view the coffin of the deceased figurehead. The Queen had a lying in state at Edinburgh’s St Gile’s Cathedral before being taken to London to lie in state at Westminster Hall for four days.

On the morning of the funeral the Queen’s coffin will be drawn in a gun carriage pulled by members of the royal navy from Westminster Hall to Westminster Abbey. Other military contingents will also take part in the procession.

At Westminster Abbey there will be a 21-gun salute for the Queen followed by a two-minute silence in her memory, then an hour-long funeral service. After this the coffin will emerge again for a ceremonial parade to Hyde Park where the coffin will be transferred from the gun carriage to a state hearse before being taken to Windsor Castle.

There, after a service in St George’s Castle, the Queen’s body will be interred in the royal vault in the castle grounds beside that of her late-husband, Prince Phillip.

What’s the difference between a state funeral and a ceremonial funeral?

That Sir Winston Churchill had the last state funeral in the UK may confuse some who remember the Queen Mother, Prince Philip, and Princess Diana’s final farewells.

State funerals are easily confused with ceremonial funerals which are given to members of the royal family who have military rank, royal consorts, and heirs to the throne, although it should be noted Prince Philip did not have a state funeral at his personal request.

The last non-royal to have a ceremonial funeral in the UK was the controversial former Prime Minister Margaret Thatcher.

Who will be at the Queen’s funeral?

State funerals are characterised by grand attendees such as dignitaries and foreign heads of state, with protocol dictating that heads of state from every country in the world are invited along with their spouses.

It has already been widely briefed that political leaders from across the globe will be at Westminster Abbey with New Zealand Prime Minister Jacinda Ardern, US President Joe Biden, and Turkey's leader Recep Tayyip Erdogan set to attend. The invitation extended to the Saudi Crown Prince Mohamed bin Salman Al Saud has sparked criticism from human rights campaigners.

Likewise there will be representatives from the remaining royal families of Europe including Denmark, Belgium, the Netherlands, and Spain with King Felipe VI having blood ties to the British monarchy. Royal watchers and Spanish gossip columnists will be closely watching too as Spain's former king Juan Carlos is expected to break his self-imposed exile in Abu Dhabi to attend. His estrange wife and former queen Sofia is also invited. A potential big headache for seating arrangers...

It’s strange to think that at the UK’s last state funeral attendees included wartime figures and legendary 20th century leaders like Dwight Eisenhower and Charles de Gaulle. On that occasion despite the cold war Russian political leaders were in attendance, for the Queen’s funeral none will be due to the war in Ukraine.

Other notable omissions include the heads of state of Iran and Nicaragua who can only come at ambassadorial level. Meanwhile tight numbers mean that a strict two-invite policy has been implemented meaning, for example, former US presidents are not invited.

How can I watch the Queen’s state funeral?