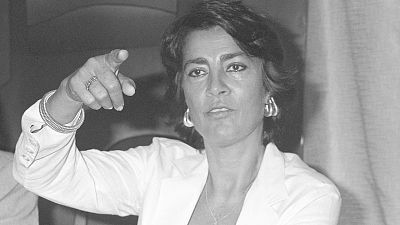 Irene Papas, the Greek actress and recording artist renowned for her dramatic performances and austere beauty that earned her prominent roles in Hollywood movies, as well as in French and Italian cinema over six decades, has died aged 93.

The Greek Culture Ministry confirmed her death on Wednesday.

After appearing in 'The Guns of Navarone' (1961) and 'Zorba the Greek' (1964), acting alongside Hollywood stars Gregory Peck and Anthony Quinn, Papas gained recognition on a global scale.

“Magnificent, majestic, dynamic, Irene Papas was the personification of Greek beauty on the cinema screen and on the theater stage, an international leading lady who radiated Greekness,” Culture Minister Lina Mendoni said in a statement.

Greek Prime Minister Kyriakos Mitsotakis described her as a source of “admiration and inspiration” to generations of Greeks.

Born Irene Lelekou in the mountainous village of Chiliomodi near Corinth, Papas attended the Royal School of Dramatic Art in Athens.

To the disapproval of her family she left home at 18 years old to marry Greek film director Alkis Papas in 1947 - but they divorced four years later.

While she started her acting career performing in variety and traditional theatre, she made her film career debut in 1948 with a small part in Nikos Tsiforos's 'Fallen Angels'.

By the mid-1950s, she was an in demand star, after having signed a contract with Italian production company Lux Film, and starring in two sword and sandals epics, 'Attila' (1954) and 'Theodora, Slave Empress' (1954).

Papas gained further recognition when she bagged her first major role in a Hollywood movie in 1956 - starring alongside James Cagney in the Robert Wise western 'Tribute to a Bad Man'.

It was Michael Cacoyannis' 'Zorba the Greek' (1964), however, that truly brought her international stardom and cemented her reputation as an acting powerhouse.

Papas worked with the Cypriot-born director throughout her career, including a number of classical tragedies, such as 'Electra' (1962) and 'The Trojan Women' (1971), where she starred alongside Katherine Hepburn and Vanessa Redgrave.

Aside from her work in cinema and theatre, Papas will also be remembered as a strong supporter of the Greek Communist Party and a vocal opponent of the military dictatorship that governed the country between 1967 and 1974.

Furthermore, she was also recognised for her musical talents, collaborating on albums with two of Greece's greatest composers Mikis Theodorakis and Vangelis.

She famously sang on the 1972 song "(∞Infinity)" by the band Aphrodite's Child (co-founded by Vangelis), which was denounced by some for being too overtly sexual.

In the track, Papas chants "I was, I am, I am to come" repeatedly and hysterically over a percussive backing.

The late actress and recording artist also went on to work with Vangelis again in her album of eight Greek folk songs, entitled 'Odes' (1979).