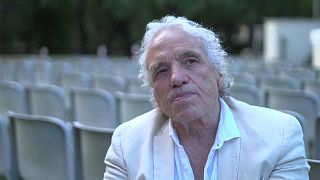 The drama chronicles a particular time in the life of the iconic Italian Saint at the end of World War I.

News of Padre Pio and his supernatural powers had already spread throughout the country as soldiers returned from the battlefield. The mystic Capuchin monk was drafted for military service in 1915 but was discharged a year later due to illness.

The young priest announced he had "stigmata" wounds in 1916. Pio affirmed he bled in his hands, feet and side and developed scars just like the crucified Jesus Christ.

The Catholic Church later claimed that the marks were authentic.

Set in San Giovanni, a rural Italian town in the south of the country, the film begins with Padre Pio's (played by award-winning actor Shia LeBoeuf), arrival to a Capuchin monastery.

The town was still a vestige of Italy's feudal past as the Catholic Church and wealthy landowners tried to hold onto power amid the first inklings of Italy's post-war socialist movement that saw factory workers and peasants go on strike.

Social unrest erupted into a little-known massacre after the socialists won a 1920 local election, the results of which, the entrenched conservatives refused to respect.

When the winning socialists tried to hang their red flag on the municipal building and install their mayor on Oct. 14, 1920, the police killed 14 people and injured another 80.

Some historians - and Ferrara - point to the "Massacre of San Giovanni Rotondo" as the catalyst of militant fascism in Italy.

"The confluence between the massacre and his (Padre Pio's) stigmata both happening in the same place at the same time.

"I mean, the massacre for me is like the beginning of World War Two, it's the start of fascism.

"And they weren't called fascists, but what happened there right after that just happened all - you know, I mean, fascism was invented here and created here, it's not a German idea.

"So to celebrate, you know, the free elections of Italy this was what happened," Ferrara adds.

Padre Pio died in 1968 and was canonised in 2002 by St. John Paul II, before going on to become one of the most popular saints in Europe.

Many miracles including reports of healing, soul-reading, levitation and even bilocation have been attributed to Pio who became the corner-stone of Italian Catholicism.

However, his life was not free of controversy. Ferrara, a devout Catholic omits some of the more controversial tales within the Padre Pio saga from his picture.

Pio was involved in a dozen Vatican investigations into purported dalliances with women, financial improprieties and doubts about the stigmata.

In place of these controversies, Ferrara, who has lived in Italy for several years, weaves a parallel tale about the beginnings of fascism in Italy that is, unexpectedly, utterly relevant today.

The film will be presented in the Giornate degli Autori section, which is modelled on the Directors' Fortnight in Cannes and highlights the great authors of cinema.

But Ferrara is well aware that his 1993 cult classic about a corrupt, drug-addicted cop "Bad Lieutenant," and his earlier "The Driller Killer," about a New York artist who randomly kills people with a power drill, gave him something of a reputation.

The director credits his change of pace and current entry into the Venice Film Festival to his decade of sobriety and a new life in Italy.

"Once we kicked the drugs and the alcohol, we started to see a different way of life, of living... a different life.

"I think it's more just trying to get our game right," he says.

The Venice Film Festival runs from the 31st of August until the 10th of September.