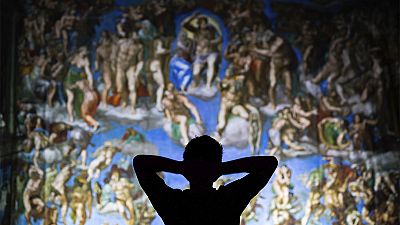 What if the Sistine Chapel in Rome came to you?

The Palais de la Bourse in Lyon features 34 frescoes of biblical scenes painted by the Italian artist Michelangelo on the ceiling of the Romanesque chapel.

For the first time, the southern French city is receiving a reproduction of the ceiling of the Sistine Chapel in Rome, painted by the Italian artist Michelangelo in the 1500s.

The multi-talented artist, also renowned for his sculpture of David (1504) and the Pietà (1499), had completed his creation in 1512, the height of the Quattrocento.

This international exhibition has already wowed visitors from around the world in cities including Shanghai, Chicago, Berlin, London and Madrid.

In France, the spectacular Salle Corbeille displays the life-size reproductions on a 845m2 surface. The images on the site were produced using a technology known as SEG or "Silicon Edge Graphics". This method makes it possible to enlarge a photo without losing quality on the canvas.

The birth of Adam and Eve, the Last Judgement, the Creation of the Sun, the Moon and much more are all meticulously detailed in the photographs of these Michelangelo's masterpieces.

In the UK, the exhibition is already on in Glasgow and future shows are planned in Leeds and Liverpool. Other dates are soon to be announced in Germany, Spain and Portugal.

It's a wonderful opportunity to discover an artistic achievement that has left its mark on the world's heritage, without having to travel to Italy! (Think of your carbon footprint!)

This immersive experience is brought to you by the firms, Fever and See Global Entertainment, who collaborated in 2019 for the Tutankhamun exhibition in Paris.