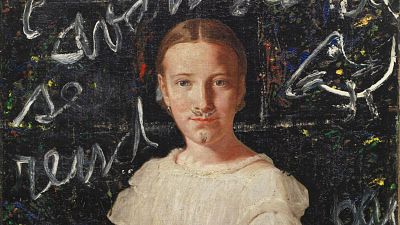 Doodles, sketches and caricatures by artists from all epochs, from Leonardo Da Vinci to Basquiat, are going on show in an exhibition that shifts the focus to the back of the paintings and to the sketches scattered across artists' studios.

150 works, from the Renaissance to contemporary times, tell the story of the art of doodling, in "Gribouillage / Scarabocchio", from March 3 to May 22 at the Academy of France in Rome, in the Renaissance Villa Medici.

The exhibition highlights one of the most unknown and least controlled aspects of the practice of drawing through works by Leonardo, Michelangelo, Bernini, Picasso and many others, from various Italian and European collections.

For the first time, visitors can admire the drawings traced on the back of the "Triptych of the Madonna" by Italian Renaissance painter Giovanni Bellini, as well as Delacroix's childhood notebook and portions of the workshop walls of Renaissance sculptor Mino da Fiesole.

"Often the doodle is seen as a marginal phenomenon, but in reality doodles are part of the creative process and therefore an important part of artists' creativity. The idea of holding an exhibition on the doodle came from a desire to show how works of art, which are always conceived with a beginning and an end, from the first sketch to the finished work, are actually made up of moments in which artists have to let off steam, regenerate their stroke," says Francesca Alberti of the University of Tours who curates the exhibition with Diane Bodart of Columbia University.

The devil's in the details

The exhibition explores the hidden side of making art and invites visitors to move their gaze to the back of paintings or the walls of workshops, to the margin of drawings or underneath detached frescoes, showing how these experimental, transgressive, and liberating graphic practices, which seem to obey no rules, have always marked the history of artistic creation.

Hidden behind or in the margins of the works of the most famous Renaissance artists lurks a profusion of rather clumsy sketches and surprising graphic games: schematic profiles, grotesque heads, abstract forms.

Marginal drawings reveal fragments of everyday life and of the collective work of the Renaissance workshops, full of experiments and ironic caricatures.

But the space left for graphic liberation, for mindless play, can also be found in places not designated for art, such as prisons or banks.

In the course of the centuries, however, the doodle slowly developed from a rudimentary, childish sketch that had to be hidden into an artistic element with its own artistic identity.

During the 20th century, the search for a primitive naivety led the European avant-garde to identify in childish drawing and doodles a regenerative element capable of escaping academic constraints.

The doodle thus moved from the back to the centre of the canvas.

The exhibition runs from 3 March to 22 May 2022, at the Academy of France in Rome, in the Renaissance Villa Medici.