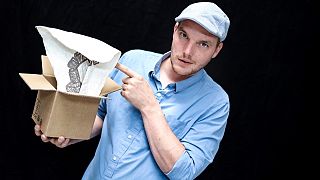 With a ball of paper that seems to miraculously come to life, Belgian illusionist Laurent Piron earned himself the title of World Magic Champion.

To secure his elusive title, Piron competed in the World Championship of Magic, which is held every three years - this time round in Quebec City.

His dazzling yet small scale illusion 'Paper Ball' has been developed by Piron for several years and one he hopes can recapture the story-telling skills of an earlier era.

The son of a sound engineer, Piron grew up as a do-it-yourself hobbyist and started doing magic tricks at 18, learning basic techniques with a friend.

He moved to Vancouver, Canada, when he was 22-years-old, where he became involved with local street magicians.

"The street gave me professional knowledge and a relationship with the public. If the audience doesn't like you, they go on their way," he said.

"You have to have enough energy, catchphrases, jokes, and catch the eye. The street taught me to develop my character to attract the crowd."

After several years travelling around Canada, Australia, New Zealand, and Europe, Piron returned to Belgium in search of a place on stage.

"I have always liked theatrical magic, a narrative that brings in visuals - not just glitter boxes or a rabbit out of a hat," he said.

Piron had official training at the CNAC (French national centre for circus arts) in France and is currently a key figure in the Alogique theatre ensemble.

Life since being crowned the World Magic Champion

Since winning the competition in Quebec City last month and returning home to his home outside Liege in eastern Belgium, the magician has been flooded with invitations to perform all around the world.

"We're going to be, for at least the next three years, the most sought-after show in the world," Piron told AFP.

Aside from a tonne of global bookings, he's also attracted the attention of one of the world's most famous musicians - David Copperfield.

When I got to Belgium, I turned on my phone when I got off the plane and I saw that I had a voice mail from an American number," the 35-year-old Belgian said explained.

"I think to myself, "Well, that's weird". I listen to it and I hear that it's David Copperfield, who congratulated me and told me that he would like to talk to me and see my show."

Piron has plenty more tricks up his sleeves and he hopes to one day take his show to perform on Broadway.