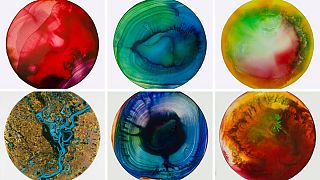 Turning pollution into art by extracting pigment from contaminated streams: this is the project artist John Sabraw has been throwing himself into for the past decade. Through the combination of science and art, rigorous engineering processes and creativity, this unique initiative can provide concrete solutions to combatting water pollution.

Born in Lakenheath, England, John Sabraw now lives in the US where he is an art professor at Ohio University.

As a longtime political activist, Sabraw spoke out against the invasion in Iraq and attracted some unwanted attention - and a deluge of hate mail. This experience made him realise that he would struggle to make meaningful change in the political sphere. Instead, he became interested in environmental issues and sustainability, and could foresee his work as an artist having the power to encourage change.

Sabraw’s realisation that sustainability causes conflict is reflected in his artwork which has become more and more defined by sustainability. His multiple paintings, drawings and collaborative installations are produced in an eco-conscious manner and can be found in places such as the Museum of Contemporary Art in Honolulu, the Elmhurst Museum in Illinois, Emprise Bank and Accenture Corp.

The point however, is not to raise awareness of the environmental issues of our era. His art is rather considered as opening up a dialogue regarding these problems but also acting as a potential solution.

“Awareness is overrated, at this point if you don’t know that we are in trouble from the climate, then there’s not much to be done. What I do with my work is not necessarily increase awareness, but I try to generate a different dialogue," Sabraw explains.

"The work may have a kind of contemplative dynamic to it. When people come to it they don’t feel my message and intention right up front. Instead what it does is it triggers an emotional, psychological memory within themselves.”

Through the use of shape and colours, he aims to guide people in recalling an experience they had in nature which sparked joy. They then enter a mindset making them more open to discuss their emotional response, which in turn encourages them to consider how they can make a real impact by living more sustainably, he says.

For about ten years, one of Sabraw’s main projects was based on a collaboration with scientists to create pigments, paint and finally paintings from iron oxide extracted in the process of cleaning up polluted streams.

After moving to Ohio, the artist activist made a discovery that shocked him and prompted him to act. He saw first hand the problems associated with polluted streams in the region. The water’s levels of contamination were extremely high due to toxic acid seeping into the water from abandoned coal mines.

His encounter with p;rofessor Guy Riefler, a civil engineer who had also been reflecting on how to solve this issue, led to the development of their ambitious project. They decided to extract the toxic acid mine drainage (AMD) from the polluted streams and then turn it into paint pigment. Sabraw worked hard to test the pigments, which come in a variety of yellows, oranges and reds (and even purple), and to improve their quality. The objective: to get the best possible pigments out of the iron oxide extracted from the stream. When these pigments can finally be sold commercially, the team wants the revenue to be reinvested into the streams’ remediation.

For a long time, funding was scarce. “But a few years ago, people started paying attention to the art and we started to get a lot of interest and to be funded by grants. We did a Kickstarter campaign that helped support us building a pilot plant in order to prove our pigment production can scale,” Sabraw explains.

This success encouraged Sabraw and his colleagues to move on to the next step - the construction of a full production plant by 2021 as a result of state funding, which will in the long term help to eradicate iron oxide pollution from Ohio’s streams completely.

For Sabraw, this kind of cooperation between art and science is crucial to make impactful advances towards a more sustainable future. “It’s the most important way forwards. Us artists have two things that can benefit the sciences. We have a spatial inventiveness, we look at things and can see them visually in so many different ways. And we say what we think, we don’t hold back - all of this can lead to innovation and creative solutions being found to bring about progress more quickly", the artist concludes.