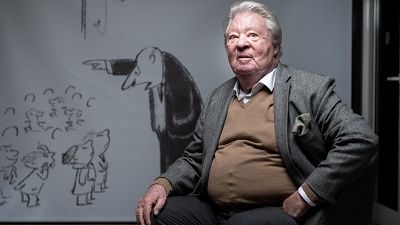 A national treasure in France and one of the most celebrated cartoonists in America due to his many covers for The New Yorker, Sempé found a refuge in his drawings. They were a way of escaping the darker realities of life and the traumas of a difficult childhood, from growing up in a violent foster home to living with his abusive mother and stepfather.

"The Nicolas stories were a way to revisit the misery I endured while growing up while making sure everything came out just fine," Sempé said in 2018.

He often said in interviews that he regretted having worked so much but continued to fantasise through the characters he drew of a happier childhood he never had.

Sempé’s timeless drawings and often wordless storytelling movingly encapsulated his unique brand of droll and at times achingly lovely humour, which tiptoed between melancholia and lightness of being.

He leaves behind a body of work depicts disarmingly honest lovers, mischievous schoolboy antics, autmnal landscapes, and the deceptively profound musings of ordinary folk that always manage to find the poetry in the everyday.

Here is a selection of Jean-Jacques Sempé’s most impactful quotes.

"School took me out of the confines of my family. It was a safe haven, a refuge."

"Dads are always the same, they act like clowns, and if you're not careful, they break bikes and hurt themselves." (From 'Le Petit Nicolas', 1960)

"People are not good, but goodness exists and there are people who catch it."

"In love, what you love is your own flattering image that the other person reflects back at you."

"We're just good little people looking for something else, but we'll never know what. And when we do know, it will be serious."