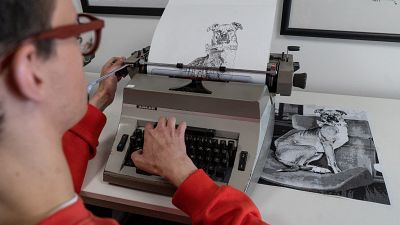 For 25-year-old London-based artist James Cook, drawing portraits used to be a struggle. But that all changed when he discovered his now-signature tool: the typewriter.

From his office in London, Cook creates incredible drawings using his collection of more than 40 typewriters, many of which were donated to him by fans of his work.

His artworks range from images of buildings and landscapes to portraits of animals and celebrities, such as Tom Hanks.

He uses a random assortment of letters, numbers and punctuation marks to form his masterpieces.

How did he get into typewriter art?

He began creating typewriter art in 2014, when he discovered the work of Paul Smith, an American typewriter artist from the 1920s.

"It was just out of curiosity that I decided to go buy my own typewriter," explains Cook from his London studio.

“Since then, I have learned little by little to draw,” he adds.

He has now built a following of more than 20,000 supporters on Instagram where he posts photos and videos of his work.

The challenges of typewriter art

Cook's small illustrations, which he completes on A4 paper, can take up to four to five days to complete. But his portraits are even more tedious.

"It never gets any easier, it's always a challenge," says Cook.

He describes his process of creating typewriter art as a "puzzle piece of letters, numbers, punctuation marks".

For recreating the curves he tends to use bracket symbols and he uses the the '@' symbol for shading as it can easily cover a large surface area.

Cook loves to complete his drawings outside, where he often attracts the attention of onlookers.

“People are kind of confused to begin with because they think I'm writing a letter. But then they sort of draw closer and normally a conversation kind of sparks from people seeing the drawings.”

The young artist will be exhibiting his works this summer from 15 July until 7 August at the Wonky Wheel Gallery, located in Finchingfield, Essex.

He also hopes to attempt the Guinness World Record for the largest typewriter drawing ever.