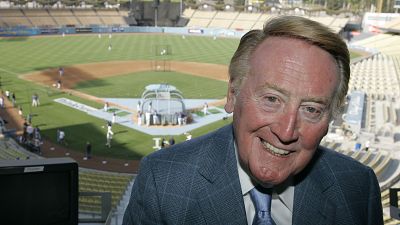 Legendary American radio and TV broadcaster Vin Scully, the voice of baseball team Los Angeles Dodgers for 67 years, has died at the age of 94.

“We have lost an icon,” said Stan Kasten, the President and CEO of the Dodgers in a statement.

"The Dodgers Vin Scully was one of the greatest voices in all of sports," Kasten added. "His voice will always be heard and etched in all of our minds forever."

While baseball has never managed to have a firm foothold in Europe, mainly due to the popularity of so many established sports, Scully was a national treasure in the US, a man whose dulcet tones was constant and insightful presence for fans of the sport.

A broadcasting veteran honoured in the White House and on TV

Born Vincent Edward Scully on November 29, 1927, in The Bronx, New York City, he became the youngest person to broadcast a World Series game in 1953, aged 25.

By the time he broadcast his final home game for the Dodgers on September 25, 2016, he held the honour of being the longest tenured broadcaster with a single team in pro sports history.

Among his many honours, Scully received a star on the Hollywood Walk of Fame and, in 2016, the Presidential Medal of Freedom, the highest civilian honour given by the President of the United States.

Another notable honour was through the medium of TV. Indeed, for discerning series fans and cinephiles who happened to have a baseball blind spot, Scully was indirectly immortalised in the hit show The X Files. Creator Chris Carter named Agent Dana Scully (played by Gillian Anderson) after Vin Scully.

Vin Scully is survived by his five children, 21 grandchildren and six great-grandchildren.

Robot drummers and posters in stands for Taiwan's baseball season