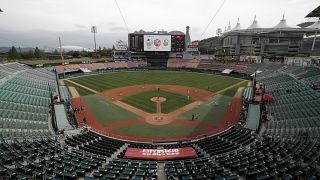 The KBO League began the season with a match between SK Wyverns and Hanwha Eagles behind closed doors in Incheon.

The Korea Baseball Organization announced earlier it would start the league without fans and gradually open the games for public access depending on how the coronavirus situations develop.

Pictures were placed in the stands depicting absent fans, and the stadium was quiet enough to hear cheers and shouts from the dugout.

"I am delighted just by the fact that I can hear the sounds from a baseball match outside," said 65-year-old baseball fan Cho Ki-hyun.

Jung Young-suk, leader of SK Wyverns cheerleading team, said they have an online messaging board for fans and hopes fans will be buoyed by following the KBO League games.

More than 10,000 people have been infected in the nation's outbreak, and more than 250 have died.