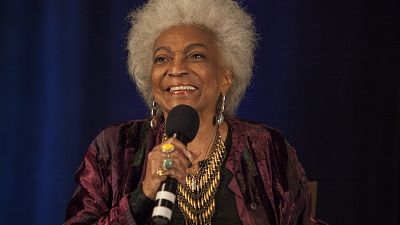 The actress broke new ground for Black women in film and TV, and brought minorities and women into NASA.

Nichelle Nichols, the trailblazing actress and singer best known as the USS Enterprise’s communications officer Lieutenant Uhura in the original TV show "Star Tek", has died at the age of 89.

“I regret to inform you that a great light in the firmament no longer shines for us as it has for so many years,” wrote her son, Kyle Johnson, on the website Uhura.com.

Born Grace Dell Nichols in Chicago on Dec. 28, 1932, Nichols aspired to star in musical theatre before getting her big break in Oscar Brown’s 1961 musical "Kicks and Co.", as well as a New York production of “Porgy and Bess”.

She was cast in small roles before signing on for "Star Trek", playing Nyota Uhura – whose name came from the Swahili word for “freedom” – and becoming one of the first African American women to have a recurring speaking role on television. Up until that point, Black actresses were largely seen in servile or subordinate roles.

Trekkies and co-stars have shared their sadness at the news of her death, with "Star Trek" co-star George Takei writing on Twitter: “My heart is heavy, my eyes shining like the stars you now rest among, my dearest friend.”

Celia Rose Gooding, who currently plays Uhura in “Star Trek: Strange New Worlds” wrote on Twitter that Nichols “made room for so many of us. She was the reminder that not only can we reach the stars, but our influence is essential to their survival. Forget shaking the table, she built it!”

Nichols is remembered for breaking stereotypes and barriers for Black women in Hollywood.

When she considered leaving Star Trek after the first season to pursue a career on Broadway, Rev. Martin Luther King Jr., a fan of the show, told her of the importance of her character for visibility and for other African American performers. When they met at a civil-rights gathering in 1967, he persuaded her to stay on the show.

Nichols carried on playing the role until 1969 and appeared in six big-screen Start Trek films from 1979 to 1991.

In 1968, Nichols made headlines when her character shared a kiss with Captain Kirk (played by William Shatner) in the episode “Plato’s Stepchildren”, which aired on November 22 that year. It is often referred to as the first interracial kiss on US television.

As high-profile as the landmark scene was, Nichols had already created something of a revolutionary moment two year prior in the show, during a 1966 episode titled “What Are Little Girls Made Of”, which included a kiss between Uhura and Christine Chapel (played by Majel Barrett).

Beyond the interracial kiss and back on Earth, the National Aeronautics and Space Administration (NASA) employed Nichols in 1977 as an ambassador and recruiter, helping to bring minorities and women into the astronaut corps.

Dr. Mae Jemison, the first Black woman to fly aboard the Space Shuttle Endeavour in 1992 cited “Star Trek” and Lieutenant Uhura as an influence for her decision to join the space agency.

She was a regular on the convention circuit and events into her 80s, until 2018 when her son announced that she was suffering from advanced dementia.

Nichols was married and divorced twice and is survived by her son.