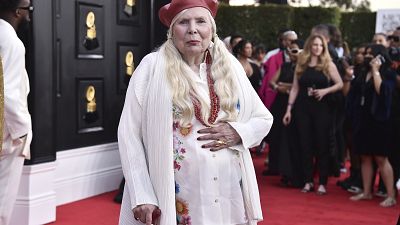 Singer-songwriter Joni Mitchell has made a surprise return to the stage after two decades.

Mitchell took to the stage of the Newport Folk Festival in Rhode Island, US, for her first full-length concert since 2002 on Sunday.

The folk legend has been plagued with health complications since suffering an aneurysm in 2015 which left her struggling to walk and talk.

The ensemble played Mitchell's most familiar songs like ‘Circle Game,’ and a few of her favourites like ‘Love Potion No. 9,’ and ‘Why Do Fools Fall in Love’.

After their rendition of ‘Both Sides Now,’ Carlile was fighting back tears. Addressing the audience, she asked: "Did the world just stop?"

As well as singing Mitchell treated the crowd to an electric guitar solo, which is the first time she has played guitar in public since her aneurysm.

The singer, who has been inducted into the rock and Roll Hall of Fame and won 10 Grammy's, has not performed at Newport Festival since 1969.

Where has Joni Mitchell been?

The gig - as performer Brandi Carlile explained - was a recreation of the ‘Joni Jam’ musical gatherings that have brought famous friends like Elton John to Mitchell's Los Angeles home in recent years.

Mitchell has been largely absent from public life as she recovered from her aneurysm seven years ago. The experience of learning to walk again is a recurring theme for the singer who suffered with polio aged nine.

In October 2021 during a speech at the 44th Kennedy Centre Honours, Mitchell addressed the health issues which have been holding her back as she picked up a lifetime achievement award.

“I always think that polio was a rehearsal for the rest of my life,” Mitchell said in reference to her childhood illness.

“I’ve had to come back several times from things. And this last one was a real whopper. But, you know, I’m hobbling along but I’m doing all right!”

Mitchell’s struggle with polio was thought by some to influence her decision to join fellow musician Neil Young in his boycott of Spotify earlier this year.

Her return to the stage will bring joy to the fans, who have gone without a new Mitchell studio album since 2007.

Ducasse, one of Belgium's biggest folk festivals, is back