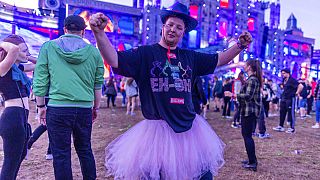 The sun is shining and the camping sections of supermarkets have been plundered.

This can only mean one thing: The summer festival season is well and truly underway.

However, this year's revellers have been urged to pay attention to an age-old raver's risk as they descend on thumping festivals after a three-year, pandemic-induced musical drought.

For more than 200,000 people attending Glastonbury, Boomtown, Bloodstock and Creamfields (to name just a few) in the UK, warnings have been issued to protect their hearing.

Fans and musicians celebrating their long-awaited chance to let loose with friends and family can be exposed to damaging levels of noise at festivals, according to musicGuard.

"This level of sound, sustained over several hours or days at a festival, can create hearing difficulties that last well beyond a few hours of ringing in the ears on the way home,” he added.

One of the biggest threats to festival goers is tinnitus, although queuing for grim toilet facilities and dodgy doner kebabs also carry their own dangers.

A common problem caused by prolonged exposure to high levels of noise, tinnitus manifests as a ringing, buzzing or humming in the ear, and can impair hearing and affect wellbeing for the rest of your life.

Around 13% of the UK population suffers from it persistently, according to the British Tinnitus Association, and it often cannot be cured.

And it's not just for those in the mosh pit: the risks of ear-busting sound are much greater for those on stage.

The average sound intensity generated by a drumkit is 119 decibels, and the other musicians need to turn up their instruments to balance this.

Stadium concerts can be especially problematic for musicians, as the reverb created by a venue built for sport, not music, means further amplification is needed to overcome this.

“Your ears are one of the most crucial pieces of ‘equipment’ you own,” says Bennett, addressing musicians. “Making sure you give them the same protection you give your instrument is vital to help ensure a long and successful career.”

He recommended three steps that both bands and fans could adopt to protect their hearing and minimise the risk of developing tinnitus: wearing ear protection -- not just while performing but when rehearsing too -- taking a break from noise to give the ears a chance to recover, and keeping the volume down when listening to music.

Ducasse, one of Belgium's biggest folk festivals, is back