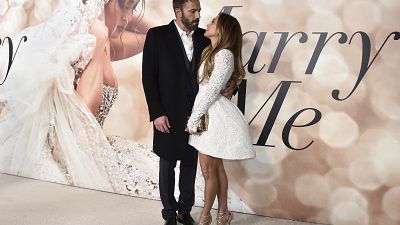 Ben Affleck and Jennifer Lopez got married in Las Vegas this week - could they kickstart a trend for eloping?   -   Copyright  Jordan Strauss
By Tim Gallagher  •  Updated: 23/07/2022

The words of actress, singer, and newlywed Jennifer Lopez as she announced to her fans she had married on-off partner Ben Affleck in her newsletter ‘On the J Lo’.

Affleck and Lopez have been romantically involved (and uninvolved) for 20-years and for their nuptials decided to eschew the celebrity circus wedding in favour of an intimate elopement.

“Stick around long enough and maybe you'll find the best moment of your life in a drive through in Las Vegas at 12:30 in the morning,” wrote Lopez.

The couple have received plaudits from fans and commentators for finding love later in life - Lopez is aged 53 and Affleck 49 - but their choice of wedding is perhaps the biggest statement about their relationship.

The seedy glamour of a Las Vegas wedding has been a trend ever since Elvis and Priscilla Presley tied the knot in 1967. Since then Richard Gere and Cindy Crawford, Angelina Jolie and Billy Bob Thornton, and Bruce Willis and Demi Moore have all walked down the white chapel aisle to say their vows.

More recently Lily Allen and David Harbour, Sophie Turner and Joe Jonas, and Kourtney Kardashian and Travis Barker have all eloped to Vegas too. Although it should be said that Turner and Kardashian both went on to later hold lavish ceremonies for friends and family.

But is elopement just for the rich and famous? Let’s look at the enduring appeal of a runaway wedding.

Planning a wedding during the pandemic

During 2020 COVID lockdowns, limits on guest numbers, and venue closures meant that elopement became an attractive option for wedding planners.

“Eloping gives couples the chance to get married as just the two of them, or among a small party of guests,” says Luke Nathan co-founder of The Wedding Travel Company who helps couples plan weddings abroad.

“People can get married in a little white chapel for a much more affordable price.”

“We’ve seen this become more popular since travel restrictions have been eased allowing couples who've  been waiting a long time to get hitched.”

The intimate setting is one thing, but potential savings are another.

The Wedding Travel Company found that Las Vegas is the most popular destination for couples to enquire about, and that the cost of this trip can be roughly 90 per cent less than planning a traditional wedding.

“People can get married in a little white chapel for a much more affordable price.”

Where is Europe’s Las Vegas?

Nevada’s marriage laws and the many media representations of Las Vegas weddings make eloping there a deep part of the American psyche. Meanwhile the neon lights, Elvis impersonators, and budget chapels are instantly recognisable around the world.

But is there a European equivalent?

Gretna Green in Scotland is the home of the shotgun wedding, attracting runaway couples since the regency period (the real one, not the one from Bridgerton). Meanwhile Denmark attracts many German couples who, hoping to escape the fabled German bureaucracy, head there for a quick marriage.

Strikingly though, rather than Europeans heading off to Las Vegas to take part in an iconic tradition, many Americans are now heading over here for a peaceful elopement in a classic setting.

“98 per cent of my clients are American,” says Amber Peyrotty, a photographer and elopement planner who is the CEO of wedding company Zephyr et Luna.

Peyrotty says that under the influence of wellness culture American couples are ditching the stressful wedding planning in favour of an intimate ceremony.

“They think more about themselves and their mental health. They don’t want the family drama or to be the centre of attention. They choose themselves instead of everybody else.”

Peyrotty’s most popular destination for eloping couples is Iceland where they can choose between mountains, glaciers, fjords and black sand beaches to say their vows. Scotland is another nature-rich northern European destination that proves popular, while many head for rustic Mediterranean settings.

“A big part of what I do is helping them find the right location,” Peyrotty says.

So whether it’s cost, ease, or mental health it seems like many more may soon be taking a trip down the tunnel of love like J Lo. Let's hope there’s enough room in Iceland and Scotland for all of them.