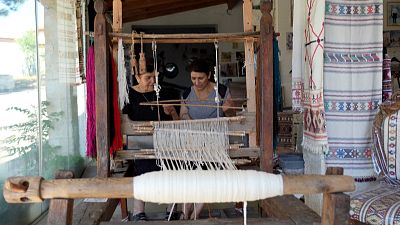 In the small hilltop village of Fyti in Cyprus, mother and daughter Irène and Diamant Diomidous are two of the few remaining Fythkiotika weavers.

The long-standing weaving style, which is known for its signature patterns and vibrant coloured fabrics, has been practiced in the Cypriot village since the era of Lusignan rule in Medieval Times.

Traditionally, Fythkiotika is introduced to young girls from an early age by their mothers, and has been passed down through generations.

"I started weaving when I was 15. My mother was doing it and by the time she left the loom, I was getting into it. Since then I have continued and worked on the loom," says Irène.

In 2015, Fythkiotika received UNESCO status when it was added to the Intangible Cultural Heritage of Cyprus list.

Irène and her daughter can be found creating gorgeously woven textiles at the Fyti Weaving Museum, which is free to enter all year round.

However, as 52-year-old Diamant explains, the artform has seen a drastic decline in the past decade, as more and more young people have started leaving rural areas.

"Nowadays, there are not many young girls living in the village, very few, so they are not taught to use the loom," says Diamant.

But the two women are determined to keep the Cypriot craft alive and inspire the next generation to learn the traditional artform.

Check out the video above to see the process of Fythkiotika weaving.