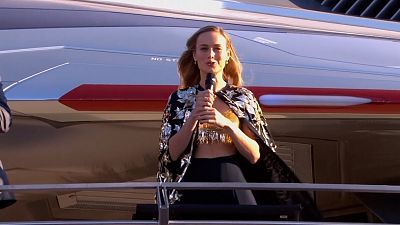 Captain Marvel herself has attended the opening of a new Avengers Headquarters in Paris.

Disneyland Paris has just launched an entirely new section of the theme park, dedicated to the Marvel Cinematic Universe (MCU).

The Marvel Avengers Campus will officially open to the public on 20 July, and guests will be able to get up close and personal with their favourite superheroes.

The new compound was announced in 2018 by then chairman and CEO of The Walt Disney Company, Bob Iger alongside France’s President Emmanuel Macron.

Although work was temporarily held up by the COVID-19 pandemic, the €2 billion project is now finally finished.

At the launch on Sunday, Brie Larson, who plays Captain Marvel/Carol Danvers in the MCU, gave a speech in front of the Quinjet platform alongside current Disney CEO, Bob Chapek and Disneyland Paris President Natacha Rafalski.

“It's been many years of playing Carol, and through that I've earned a lot of strength, like inner strength, physical strength, using my voice.

"Getting to play a character all day that is so strong, but also at the same time willing to apologise if she does wrong, is just, it's a powerful thing. It's a great way to spend my day, being Carol Danvers,” she said.

More than 1,200 invited guests took to the rides following Larson's speech, including Avengers newbie Iman Vellani, the star of Disney+ series "Ms. Marvel", along with "Guardians of the Galaxy" regular Pom Klementieff.

“It's the coolest thing ever. We just went on Flight Force and it's the craziest ride and it's like Iron Man and Captain Marvel, my two favourites - they're like my Avengers parents, you know I love them,” Vellani said.

“The ride was so much fun. Not expecting that. It was like a spiritual experience and literally ended with The Avengers theme song, I was dying. Okay. I'm having a lot of fun,” she added.

“I was emotional and excited,” Larson later said. “I don't know if it will sink in today. Maybe tomorrow. Maybe. Maybe it'll take a while.”

A grand finale capped off the evening, with the Campus' Doctor Strange conducting a drone light display, forming Avengers icons in the sky.