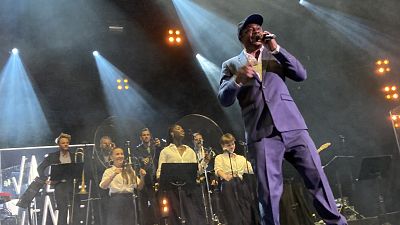 After a long absence from the stage, MC Solaar is back. The French rap legend opened the prestigious Jazz à Vienne festival in southeast France on June 29 - an event that brings together the greatest names in Jazz.

The concert included some of the best songs from his first three albums. Something that was only possible until recently due to the song rights being blocked by record company Universal.

Speaking to Euronews, Mc Solaar said: "My first albums were released last year, they are available digitally and on physical media, and this was an opportunity to play them, to play songs that we haven't played for a long time."

Renowned for his poetic and literary style, MC Solaar’s music is a far cry from the hardcore, aggressive rap that is also popular in France. His clever hip hop mixes different cultures, with a peaceful and joyful message.

"Afrika Bambaataa, when the Zulu Nation came to Paris, we took these words "Peace, Unity, Love, Having Fun"... taking negative energies and transforming them into positive ones, while making art, beat-box, sculptures, tagging, frescoes, dancing... expressing ourselves! But there was this positive dimension. Afrika Bambaataa was someone who had gone to listen to world music, to try to make something that was a bit like 'P-Funk'."

25 years on, the French artist's lyrics also haven’t aged a bit. In his first albums, the rapper was already denouncing global warming, environmental damage, and the cost of unchecked capitalism.

"There are messages like that, what I'm saying about the system, maximising profits, crushing each other... So it's funny, it means that I'm, a few years later, singing teenage things, but that is still valid today. Album after album, I'm sure it gives some people direction or it pushes some people to continue their struggle."

Accompanied by the Orchestre des Pays de Savoie, a Brass Band and choristers, Solaar rose like the Phoenix from the flames to open the 2022 edition of Jazz à Vienne. The festival runs until July 13.