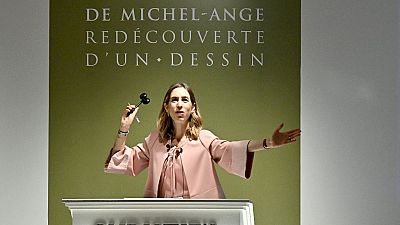 A sketch by Michelangelo sold for a record-breaking amount at an auction in Paris on Wednesday.

The Italian master's A4 drawing of a naked man fetched €23 million ($24 million) at the Christie's Paris auction house.

Dating from the end of the 15th century, it depicts a naked man standing, with two other figures in the background, in pen and brown ink.

The €23 million paid for this work by Renaissance sculptor and painter, whose full name is Michelangelo di Lodovico Buonarroti Simoni, exceeds past records.

The last time the naked man sketch was put up for sale was in 1907 at the Hôtel Drouot in Paris.

It remained classified under the 'School of Michelangelo' in a French private collection, before being attributed to Michelangelo in 2019.

The framing and dimensions of the A4 sheet are inspired by the Italian painter Masaccio's 'The Baptism of the Neophytes' fresco, and illustrate Michelangelo's interest in the male form.

In September 2019, it was declared a national treasure by France.

This means the drawing cannot be taken outside of the country for 30 months and gives the French government and its museums the opportunity to buy it back at any time.