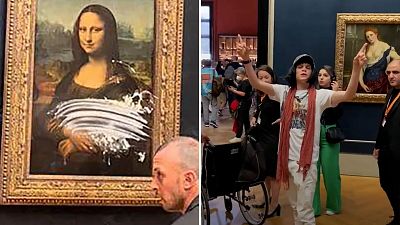 The world's most famous painting has been attacked with cake by a man disguised as an old woman   -   Copyright  Luke Sundberg
By Euronews  •  Updated: 30/05/2022

A bizarre incident occurred at the Louvre Museum in Paris yesterday (29 May) as a man in disguise smeared a cake over the Mona Lisa.

Videos posted on social media appear to show the young man arriving in a wheelchair, wearing a wig and lipstick.

One Twitter user wrote that a man “dressed as an old lady jump[ed] out of a wheelchair and attempted to smash the bulletproof glass of the Mona Lisa” before “smear[ing] cake on the glass.”

The man, whose identity has not been confirmed, claims to be an environmental protester.

The Mona Lisa is believed to be undamaged as it is protected by glass. Following the incident, guards were filmed cleaning off the smeared cream.

It is unclear what charges, if any, the man behind the stunt will face.

This is not the first time Leonardo Da Vinci's iconic painting has been attacked.

In 1956, the painting was damaged by two attacks: one with acid, and another with a rock – chipping a speck of pigment off of the portrait.

Both of these incidents prompted the museum to place bulletproof protective glass around the painting.