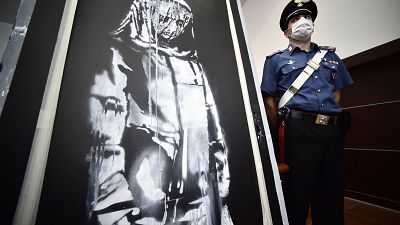 The Banksy mural beside a French official   -   Copyright  FILIPPO MONTEFORTE/AFP or licensors
By Jonny Walfisz  with AFP  •  Updated: 08/06/2022

The thieves of a Banksy mural on the door of the Bataclan will face trial in Paris today.

After the horrific terrorist attacks at the Bataclan concert hall on 13 November 2015, famed street artist Banksy created a mural commemorating the victims.

An Eagles of Death Metal concert at the Bataclan was stormed by terrorists as part of a coordinated attack that killed 130 people, 90 of whom were in the concert hall. On the door that people used to evacuate the Bataclan, Banksy created an image of a veiled girl in a mournful stance.

But in January 2019, a group of art thieves stole the mural and the entire door it was painted on.

As the alleged thieves have been reprimanded and face trial in Paris, here’s what they are accused of doing.

At four in the morning on 26 January 2019, under the cover of darkness, a white van with hidden number plates stopped outside the Bataclan building.

Three masked men exited the vehicle and cut the hinges of the door with angle grinders powered by a generator. In under 10 minutes, they removed the door with the artwork protected under a plexiglass window.

The motivation for stealing the artwork is clear. Banksy’s works are incredibly popular both with critics and the public and have attracted massive fees when they’ve gone up for auction.

Most famously, his artwork 'Love is in the Bin' was sold for over €1.3 m at Sotheby’s in London, before it suddenly self-destructed after a shredding device Banksy had hidden in the frame was triggered.

The mural wasn’t the only Paris Banksy work to disappear around the same time. Other works stolen include a mural of a businessman in a suit offering a dog a bone – having just sawed the animal's own leg off – and an image of a masked rat wielding a box cutter.

The potential for a private market sale of a Banksy work tied to such a tragic historic moment would likely have netted a huge sum. It has been estimated to be worth between €500,000 and €1m.

The theft of such an emotionally charged artwork from Paris immediately sparked outrage. A Bataclan spokesperson was indignant, saying this “symbol of meditation and belonging to residents, Parisians and citizens of the world was taken away from us.”

The door was subsequently found in Italy, in an abandoned farmhouse in the eastern region of Abruzzo. On 10 June 2020, French and Italian police forces traced the journey of the door to a farm around 15km away from Sant’Omero.

Three men were arrested in relation to the theft, Kevin G., Franck G.A. and Danis G. Another arrest was also made in Var, France, of Mehdi Meftah, who is suspected of having ordered the theft.

The three men accused of the theft immediately confessed their guilt but Franck G.A. and Danis G. claim to only played a 'rôle d'exécutant' (executing role).

Meftah, accused of ordering the theft, is a 41-year-old who won €7.5 million in the lottery and created a luxury t-shirt brand, BL1.D, selling shirts with real 18-carat gold bars sewn into the necklines.

The trial of the men involved in the theft is one that’s close to the bone for Parisians.

At the same time as the theft trial begins, the ongoing trial of the terrorists involved in the 2015 attack is also taking place.

The months-long trial of lone surviving member of the ISIS cell Salah Abdeslam and his suspected accomplices is expected to conclude on 29 June.

In February, Abdeslam broke down in tears in court. He asked for forgiveness and expressed condolences for the victims.

Other testimonies have come from Eagles of Death Metal singer Jesse Hughes, who said that “evil did not win.”

With public emotions running high as the wounds of the Bataclan attack are reopened, lawyers for the art thieves are desperate to distance their case from the furore.

“This is a case that is being made much bigger than it really is,” argues Me Romain Ruiz, Franck G.A.’s lawyer.

“The symbolism is what it is and no one is minimising it,” says Margaux Durand-Poincloux, lawyer for Danis G.

“But as far as my client is concerned, this is still an aggravated robbery in which he was not the target decision-maker, which makes the length of his provisional detention disproportionate.”