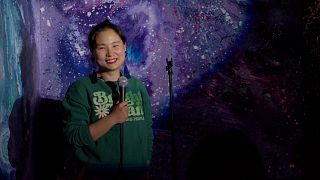 “Depression got me into comedy!” Moni Zhang proclaims with a huge smile.

Originally from China, the 32-year-old is now a full-fledged comedian in Berlin having quit her job last year as an analyst for a tech company.

The comedy spark dates back to 2018. While Zhang was in the throes of a deep depression and on medication, she went to see a comedy show and discovered the world of stand-up.

“I didn’t know what it was and then I went back and started to do it - I spoke about my experiences,” she says. “For my first show, I got five of my European male friends to sit in front and I basically roasted each of them. I felt on top of the world and then, I wanted to do it again and again and again.”

It’s been a speedy rise from beginner to comedy regular. This year, Zhang began a short circuit across Europe with shows in Germany, Spain and Brighton, performing 'Child from Wuhan', her one-woman comedy show.

This summer, she’ll be at the Edinburgh Fringe, Aug 4-28 with ‘Child From Wuhan’ at The Free Sisters and with the Anxiety & Depression Comedy Game Show at The City Café.

Half comedy, half tragedy

Zhang's set is a dramatic and comedic performance that starts with the strange reactions she gets as a Chinese person in Europe. Zhang first moved to Europe to study in the Netherlands for four years before moving to Berlin in 2016.

Then, the set takes a sharp turn into the dark parts of her childhood in Wuhan, a city that leapt into the spotlight in 2020 as the place the COVID-19 pandemic was first identified.

“I make fun of Dutch food a lot because the food is so bad, coming from Asia. I have Dutch people at my shows and they like the jokes,” says Zhang. Poking at European sensibilities was a major part of her earlier shows.

“I grew up in a sweatshop in poverty and moved to Germany for a better life only to discover gluten can kill me! This gluten allergy is the most white disease,” Zhang intones in one of her YouTube videos from earlier days.

Since then, the show has morphed into something deeper - a polished storytelling performance.

“During the pandemic I was doing Zoom comedy and stand-up doesn’t work well on that, so, I started to host a storytelling show online every two weeks and encouraged people to contribute. During this, I stumbled into a story about my childhood.”

In October of 2020, she heard about World Mental Health Day and wondered if it could be the impetus for a festival about depression. She posted her ideas on several Facebook groups and connected with other comedians.

In November 2021, she launched the 10-day Berlin Mental Health Festival which included storytelling shows, a panel on suicide prevention, a photographic exhibit, and a stand-up show for parents.

“I had no budget, it was all crowd-sourced. Everyone volunteered. A comedy club offered itself as a venue,” Zhang enthuses. “It was there that I told this Wuhan story in front of an audience for the first time. And then, magic happened. The audience was clapping for a long time and the club manager said, ‘You had a standing ovation, Moni!’”

After that, Zhang had to figure out how to fold her childhood trauma into a full comedy show. She holed up in her Berlin apartment for two weeks and the result was ‘Child From Wuhan’: “I have a really sad story and created something funny around it.”

Zhang delves into the Berlin dating scene, riffs about her pet and having diarrhoea before she transports the audience to Wuhan.

There are evocative descriptions of Wuhan and its famous noodle dish. It's a visceral account that blasts away the city’s COVID 19 connection.

Then, as if a light is turned off, she describes a brutal childhood - the only child of a single mother who walks with a limp and works in a sweatshop. The hours spent studying, the bullying, and the punishments meted out by her mother. The room goes quiet.

“The show is a powerful mix of strong emotions and humour,” recalls Brenda Penante, a Brazilian who caught the show in March. “I found it particularly touching how she talked about the complex relationship with her mother…it made my heart tremble. I remember thinking ‘this was so much more than a comedy show.’”

Finally, Zhang artfully brings the audience back to the present where she has faced her demons, what the diarrhoea actually taught her, how therapy has re-adjusted her lens on her past, and how she discovered an inner resilience and love that had been missing for so long.

“I find it touching when female audience members, especially Asian ones, tell me they can relate to this, but they didn’t have the words to summarise their experience. It gives them inspiration about their past and their relationships with their family.”

László Czöndör, a Hungarian living in Berlin, caught the show in January and then returned with his sister to see it again.

“Her life story evoked deep emotion. She always knew the correct time when to lighten the mood with a punchline,” describes Czöndör, adding that he hopes to bring his other sister to see the show, for a third time. “I liked how she taught us about règānmiàn, a traditional Wuhanese food and how to order it. And of course, her story, her dog, and [the concept of a wise teacher] Shīfù – I still have goosebumps to this day.”

Both Penante and Czöndör reached out to Zhang to tell her how they felt. It’s these kinds of interactions that spurred her to do a weekly podcast about depression and the struggles of life, interviewing fellow comedians about their challenges.

“The worst thing about depression is that you believe you’re the only person suffering and when you hear stories from others, you don’t feel alone. It is comforting.”

Comedy is a coming out for Zhang: “I was used to hiding. I was so ashamed of who I was. In Europe, I encounter lots of Europeans or Chinese who are middle-class or upper-class. I felt I was living in a cage, that no-one knows who I really am.”

For Zhang, the most important person she needed to be open with was her mother - the person towards whom she had felt intensely antagonistic.

Capturing the 2019 Berlin Comedy Newcomer Award was a personal triumph. For a long time, Zhang’s mother didn’t understand what stand-up was and couldn't get her head round the fact Zhang wasn’t getting paid for it.

“I told her I entered a competition against 50 comedians, most of them native English speakers and from the Western world, and I won. I asked her, ‘Now, can you believe that I’m talented?!’

As Zhang herself has changed and so has her mother: “She once gave me a long speech after I asked if she’s proud of me. She said she’s so proud of me, her whole life she gave to me and now I give her purpose in life.”

“I name the show ‘Child From Wuhan’ because it’s the story of a child, her experiences. I’m making peace with her.”

This is Mexican tiger fighting: a brutal indigenous rain ritual