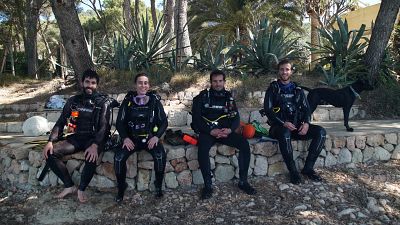 Nine young people from Mallorca have formed a non-profit organisation to help save marine life in the Balearic Sea. Arrels Marines' mission is to preserve and rejuvenate the ecosystem through marine conservation, ecological awareness and environmental education.

The organisation was founded in 2020 by Josep Vives after he became concerned about the lack of marine life surrounding his home. "I love Mallorca. I love the Balearic Islands and I see the impact that they are suffering day after day. Maybe I won't change the world, but I will try to change the place where I live," explains Josep.

Arrels Marines have drawn together people from diverse disciplines and educational backgrounds. "Our best asset is our team. We are united because we all love the sea. We were all born in Mallorca, and we all feel like it's our duty to fight and preserve the ecosystems that we saw while we were growing up here on the island," Josep tells Scenes.

The lungs of the Mediterranean

The group's primary focus is the conservation and protection of Posidonia meadows. Posidonia is a type of seagrass that contains nine species of marine plants. These meadows span an area of 460 million square meters and produce five times more oxygen than the Amazon Rainforest.

"Posidonia is extremely important because it's basically the lung of the Mediterranean. It provides us with a greater quality of oxygen, but it's also one of the most efficient ecosystems for CO2 absorption," explains Josep.

According to the European Red List of Habitats, Posidonia beds represent the most widespread seagrass meadow in the Mediterranean. The largest known meadow is eight kilometres in size and is approximately 100,000 years old. A decline in surface area of 34 per cent has been observed over the last 50 years due to untreated sewage, beach regeneration, trawling fishing, boat anchorage and climate change.

"I think that as a society, we have a very important role in preserving this Posidonia ecosystem since most of the impacts that are causing it to regress in many parts of the islands are a consequence of our own actions," says marine conservationist, Xesca Reynés.

'We are linked to nature'

Posidonia meadows are protected by The Habitat Directive of the European Union. These ancient plants protect the coastline from erosion and are vital to the survival of millions of marine and surface-dwelling creatures.

"We are linked to nature and its ecosystems in ways that people cannot imagine, and it has been this way ever since humans started inhabiting the earth. We have broken this link and become totally disconnected from nature. We perceive it as something to exploit and benefit from, rather than something that our future depends on," states Josep.

Arrels Marines is working to protect existing Posidonia meadows by organising preservation and reforestation initiatives. "We began by mainly focusing on reforestation, but in the end, we realised that it doesn't make much sense to regenerate an area without preserving it first. Therefore, we try to concentrate first on reaching all those areas that are being affected, recover them and reduce the impact so that later we can regenerate them," says Xesca.

The non-profit organisation removes harmful materials from the seabed and replants the organism in areas where it naturally grows. This replanting process helps to maintain the meadows and encourages growth.

'We try to mobilise people'

Arrels Marines believe raising awareness and educating people is key to restoring the Posidonia meadows. "We try to mobilise people because we truly believe that this is how the change will come. If we educate from an early age, we will accomplish the changes we want and build a critical society that's responsible for the environment," says Josep.

Through their non-profit organisation, the foundation aims to inspire and educate the next generation about environmental awareness. "Everyone can do a little bit. Although the future seems uncertain, hope should never be lost," Josep concludes.