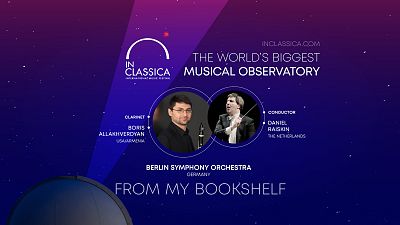 For the 11th edition of the InClassica festival, join us for a concert that sees the Slovak Philharmonic take to the stage.

The orchestra's Chief Conductor, Daniel Raiskin, presents a programme of works by Beethoven, Haydn, Shor and Schubert. Raiskin is known for cultivating a broad repertoire and looking beyond the mainstream for his strikingly conceived programmes.

You can watch the full concert live in this article on June 1 at 18h CET.

The concert is set to kick off with the Overture to Beethoven’s Egmont, Op. 84, music written for the 1787 play of the same name by the renowned author, poet, scientist and statesman, Johann Wolfgang von Goethe. Composed between 1809 and 1810, the work is known for its drama, expressiveness and power.

Next, the orchestra will play Joseph Haydn’s Symphony No. 104 in D major, the composer’s final symphony and the last of his so-called ‘London Symphonies’. The piece was premiered in 1795 to considerable success.

Following a short intermission, the orchestra welcomes to the stage the Principal Clarinet of the Los Angeles Philharmonic, Boris Allakhverdyan, for a performance of Alexey Shor’s Clarinet Concerto, a predominantly lively affair first premiered in 2020 with a lyrical and expressive middle “Andante” movement which is balanced by two energetic bookends.

The concert will conclude with Franz Schubert’s Symphony No. 7 in E major, D. 729, a work notable as remaining unfinished at the time of the composer’s death in 1828.

The InClassica International Music Festival 2022 features musicians who dedicate themselves to their craft with devotion and passion, and audiences whose love of classical music takes them to the four corners of the world.

It is a place where astonishing young talent meets some of the world’s most established and famous musicians, and where new and remarkable careers are given a unique platform to shine.

Described as the world’s biggest musical observatory, the 11th edition of the InClassica International Music festival is held at the Dubai Opera, from May 8 to June 2, 2022.