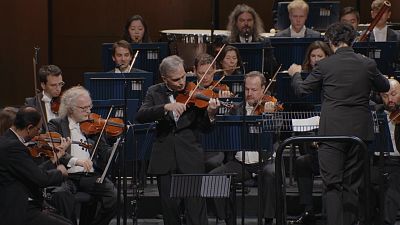 The InClassica International Music Festival came to a crescendo at Dubai Opera, with a stellar lineup of musicians performing some of the most celebrated concertos of all time.

Taking matters 'in hand', was conductor Gergely Madaras, who, having originally trained as a flautist, has been encouraged by the new wave of like-minded musical directors he sees emerging from the multinational orchestras he leads today.

The talent [pool] is enormous. And we used to have only male conductors. Luckily that has changed in the last 10 to 15 years.

“Hearing my music performed live, is a feeling like no other. It's especially true in the case of premieres, of which there were a couple at this festival. The music is not really ‘alive’ until it's being performed. And seeing it happen in front of my eyes, is just an incredible rush,” Shor told Euronews.

The work of composer-in-residence, Alexey Shor featured prominently throughout InClassica. He started his career with two passions; one for music and one for mathematics. The musicians who play his pieces, say that makes them, both brilliant and challenging.”

"Alexey Shor is a very brilliant, man. Very mild-mannered and unassuming. He is a very fluid, very fluent writer – and that always gets a wonderful reaction," says Grammy award-winning soloist Gil Shaham.

In addition to Alexey Shor's music, Gil Shaham is equally inspired by the vision of InClassica’s President, Konstantin Ishkhanov.

“He supports composers, he supports orchestras and festivals. We are very lucky to have people like Konstantin, making our world a better place,” explains Shaham.

Echoing the belief, that music makes the world a better place, is celebrated pianist Alessandro Taverna who says the concerto he performs by Alexey Shor challenges popular opinion about modern music.

“It's full of interesting aspects, many interesting rhythms and also it's very audience-friendly, as sometimes, we know that people reject contemporary music because of its difficulty.”

Asked about the reception he's been given from the audiences in Dubai, Taverna added, “People are so enthusiastic and I really love this way to receive music. It's so important, even to help the musicians. I really love the attitude that like, ‘the magic happens here’.”

Magic of a melodic kind that was perhaps felt by musicians and visitors alike before the curtain came down on InClassica, for yet another year.