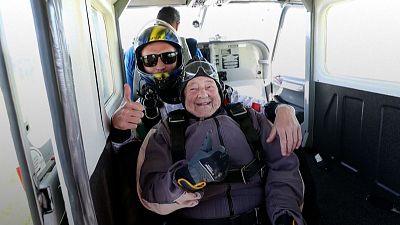 The Swedish daredevil has set the world record for the oldest person to complete a tandem parachute jump.

"It was wonderful to do this, I've been thinking about it for a long time," she explained.

With her family and friends waiting on the airfield below, Larsson sailed down smoothly, before helpers rushed to pick her up with her walker.

"Nowadays I don't see so well, but it felt good," she said when asked what she saw during her jump.

An official from Guinness World Records was on hand to record the jump.

"There was an American woman who beat the record so I had to beat hers," says Larsson, who "may have a little cake" to celebrate her achievement.

Check out the video above to see Larsson's age-defying jump