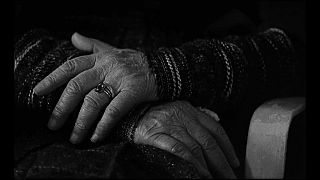 Fans of the Greek new wave have another Yorgos Lanthimos film to look forward to - but this time it's a throwback to cinema's pioneering days when films were silent and accompanied by a live orchestra.

“Bleat” will also be accompanied by a live choir when it premieres 6 May at the Greek National Opera.

It was shot on the Greek island of Tinos just before the pandemic broke out in Europe.

Oscar-winning American actor Emma Stone, who has worked with Lanthinmos before, has the lead role.

She agreed to waive her fee and work with traditional film cameras, as well as have it presented with the 36-member orchestra and choir that follows the story with a jarring and funereal score.

The movie opens in a traditional, whitewashed home at a wake. There are long portrait shots of Stone and elderly mourners sitting in a room next to her dead husband, played by French actor Damien Bonnard, covered in a white shroud.

After the guests leave, Stone has a moment of ecstasy with his body, bringing him back to life for several hours as she loses consciousness and appears to die.

With goats looking on, the man promptly buries Stone and dances on her grave, before the roles are again and finally reversed, with Stone reappearing as he goes to bed and drifts back to death.

“Bleat” was shot on Tinos, famous for its whitewashed homes, in early 2020, just before the pandemic triggered lockdowns in Greece and across Europe. Stone described the experience as a welcome change.

"It is a great gift to be able to work with Yorgos, because I can give myself over to his process and I don’t really have to think of anything. In fact, it is better if I don't," she said.

“What is the point of continuing to give in this kind of ‒ no offence ‒ stupid job of acting if you’re not gonna keep pushing and being challenged? I guess that’s also true of life.”

The film will be screened to the public for three days this week at the national opera in Athens, while Lanthimos and his associates said it could later be made available for limited release in other countries.

“It was important to have this projected from a traditional 35-millimetre print and incorporate live music, so that's always in my mind,” Lanthimos said. “It’s not just something that someone, you know, would watch on their laptop or on their phone.”

"I started thinking of this film when I was on the island. The landscape itself, the animals and the whole surroundings were a source of inspiration to begin the story," he added.