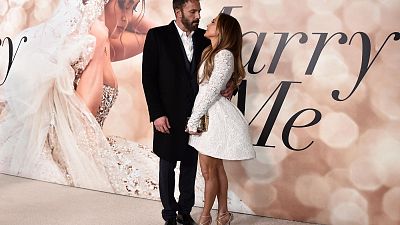 It's an announcement 18 years in the making - but celebrity power couple Jennifer Lopez and Ben Affleck are engaged to be married. Again.

J.Lo and Affleck, affectionately known by the portmanteau Bennifer, first got together in 2002 while making the movie 'Gigli', but called things off on the eve of their wedding amid frenzied media attention.

The pair rekindled their romance in spring last year and the 'Lets Get Loud' hitmaker confirmed their engagement over the weekend. In a shrewd marketing move J.Lo posted a teaser video on social media, inviting people to sign up to her newsletter to hear more about the proposal.

A video at her subscribers-only site showed an emotional Lopez gazing at the left-hand ring, which held a large green gem.

Representatives for the singer and actress later confirmed her engagement.

After Lopez and Affleck called off their engagement the first time round, she went on to marry singer Marc Anthony, with whom she had twins; while he married actress Jennifer Garner, and they had three children together.

Both couples divorced, and J.Lo was engaged to baseball player Alex Rodriguez, but they split in 2021. Lopez was previously married to actor Ojani Noa and dancer Cris Judd.