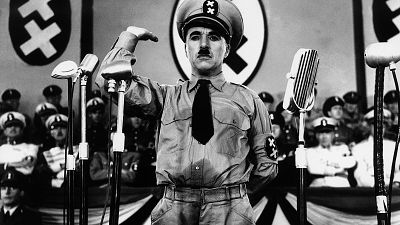 In the final scene of The Great Dictator, a Charlie Chaplin disguised as a mocking Hitler takes the stand in front of a crowd: “I’m sorry, but I don’t want to be an emperor."

He goes on: "That’s not my business. I don’t want to rule or conquer anyone. I should like to help everyone, if possible: Jew, gentile, black man, white. We all want to help one another. Human beings are like that. We want to live by each other’s happiness, not by each other’s misery. We don’t want to hate and despise one another. In this world, there is room for everyone”.

Eighty years later, the British-born comedian's film resounds with the same strength as it did when it was first released in October 1940, when Nazi Germany launched its attack on Western Europe. Now, as Vladimir Putin continues a campaign of terror in Ukraine, Chaplin’s speech continues to stand as a call-out against tyranny, and in defence of democracy and humanity.

In The Great Dictator, Chaplin portrayed a barber living in a Jewish ghetto. But he himself in fact belonged to another minority: one of the largest and oldest in Europe.

Romani filmmaker: "We never started a war, yet we have suffered"

The award-winning Spanish-Romani director Pablo Vega believes Chaplin’s most acclaimed film is directly derived from his own experience as a member of the Roma people, itself “a nation without borders” oppressed for centuries.

Vega is the creator of a short film, commissioned by the European Roma Institute for Arts and Culture (ERIAC) as part of its Proud Roma Campaign, which seeks to highlight Chaplin's own Romani origins. In Chaplin's film, he told Euronews, "All his characters are sending a message that is very Romani.

"He stands by the most vulnerable and oppressed. It's from there that he takes all the values for his characters, which are shared by the Roma people. In the end the movie is about love against hate. The concept of race is an invention: a fascist invention. There is no other race than the human race."

Chaplin, Vega says, "always knew" he was Romani: "But he was afraid to tell, because he feared people would undervalue him. And here you can see the discrimination the Roma people suffer, just because they belong to a certain ethnic group."

Vega's short film foregrounds the argument, advanced in The Great Dictator, that the most disadvantaged suffer the most horrific consequences of war. Among others it features Romani actress Alina Serban, who states: "We are peace. We never started a war, yet we have suffered.

"We have seen hundreds of thousands of our sisters, brothers and children die in wars started by others. Through our own history, we have resisted the worst injustices. Chains were put on our hands and feet. We were enslaved, tortured, murdered, and persecuted.”

Lessons for a contemporary conflict

Today, with the fighting in Ukraine showing no sign of abating, Roma activists and civil rights groups have warned of the high cost for already-disadvantaged minority groups like Romani Ukrainian citizens, who are already said to experience discrimination and prejudice inside the country.

The UN Special Rapporteur on minority issues, Fernand de Varennes, has recently expressed his own serious concerns about the plight of minorities affected by the Russian invasion of Ukraine, and the treatment of those fleeing the conflict.

“What all Roma people around the world are concerned about," Vega told Euronews, "is that when you are Romani you are turned down at the European borders. As Ukrainian citizens, Roma men are sent to the frontlines, but their families are turned back. This is dire; there's a ‘colour chart’ [at the border]. It’s something that must not be accepted."

According to some reports, those on the border are sometimes made to wait longer and are often placed in separate coaches and lines. Some report being labelled as 'economic migrants' instead of asylum seekers, placing them under further scrutiny from border guards.

Roma advocacy groups monitoring the situation on the ground also report discrimination on the Ukrainian border, in access to humanitarian aid, and even at shelters in refugee-hosting countries.

Anzhelika Bielova, a Roma volunteer with the European Roma Rights Centre, told Euronews: “Many Romani-Ukrainians who are still in the country are not getting access to aid. Sometimes they don’t know where to report to get supplies. Some don’t have access to the internet to follow the information shared online, and rely on aid from Roma volunteers. There have also been cases where locals have denied aid to Roma people because they assumed they didn’t need it and they just wanted to 'take advantage' of the situation."

The Rights Centre's Oleksandra Koriak added: “Unfortunately, there is a common thought that Roma people must follow a different channel, that Roma people have to be taken care of only by Roma volunteers and organizations."

ERIAC and other organisations like it have launched their own fundraisers for humanitarian support for the Roma people and other vulnerable victims of the war. The biggest challenge remains making the public realise that Roma suffering is also their suffering.

This was also the essence of Pablo Vega’s short film. “The Proud Roma campaign is not only about empowering Roma people," he said, "but also for our non-Roma brothers and sisters to get to know us, and the fact that we are an essential part of the European identity."

Who are the Roma people?