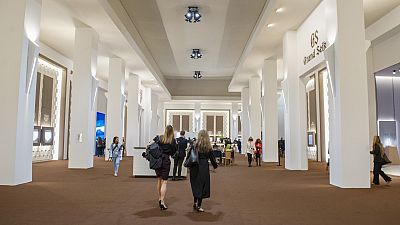 It was only a little over five years ago that many luxury watch brands begun selling online, but the pandemic has helped make watchmakers and connoisseurs alike become more open to the possibilities technology can provide.

At leading horological showcase Watches and Wonders, taking place from 30 March to 5 April, digital presentations and talks are taking place alongside the main event to utilise digital’s ability to reach a wider audience.

Inside the show, innovation is a hot topic among the exhibiting watchmakers too from NFTs to augmented reality, to digital customer service and utilising new tools and materials for watches.

In the LAB area of the event, a number of new technologies are being showcased. Some of the ideas are already out there and being used by watch enthusiasts, such as Baume et Mercier’s AR virtual try on. Launched at the end of last year, shoppers using their mobile to browse the Riviera watch can make use of the function to see what it would look like on their wrist.

Another innovation aiming to improve the customer experience is IWC Schaffhausen’s Cyberloupe 2.0 which gives customers a front row seat to the skill and talent of their watch makers. Their craftspeople can wear a special headset with a built-in magnifying glass and camera to be able to live stream their view to customers around the world so they can experience their incredible work.

Other exhibitors in the LAB were there simply to provoke a debate. Rebellion Timepieces introduced attendees to its Rebellion robot being developed to assist watchmakers in their jobs. While it could never match the intricate work of watchmakers, it is hoped that it will be used in quality control or other stages of the process to alleviate staff from repetitive tasks.

As a collectors’ item for centuries, luxury watches are now entering the world of digital collectibles. In February, Louis Moinet became one of the first watchmakers to sell NFTs.

It partnered with digital creator Tafi to make a digital artwork of its Space Revolution watch. The 1000 NFTs sold out in seven minutes at a price of 0.2 ethereum (equivalent to around €610). In addition to owning a pioneering NFT for the watch industry, owners have also been entered into a raffle to win a real-life version of the Super Moon watch released at Watches and Wonders.

Jean-Marie Schaller, CEO of Louis Moinet said: “It has opened the door to a new category of people that normally we do not reach. NFTs is a brand-new world with totally different people: younger, interested in digital more than physical things and the return has been already tremendous. Some people that bought NFTs, also bought some physical watches from us.”

The first release was such a success that the brand is already working on an idea for another NFT project. Schaller says that while they’re pioneering this space, no one is an expert in it and they embraced it as a new way to communicate with people: “I don't want purely to sell watches. I don't think it's nice. It's more about creating a relationship with people.”

What’s more, it fits in with the tradition of the brand which is named after the inventor of the chronograph. “Some people told me, ‘we were surprised that Louis Moinet was a leader in NFTs’ but he was one himself. He was he was an innovator in his time. He said: ‘the real artist cannot stay behind his time.’”

Diamonds of the future

At Watches and Wonders though, the big news is always the latest physical product releases and there were some innovative feats taking place here too. TAG Heuer has launched its first ever solar-powered watch with the dials working as panels for innovation that is seamlessly integrated into the design.

It’s real showstopper though is the Carrera Plasma which uses a total of 11.7 carats of lab-grown diamonds.

Growing diamonds in labs not a new innovation, though they have been gaining in popularity in recent years, but what makes this watch noteworthy is how the brand has used the capabilities of this technology to do something unique. The dial is made with a polycrystalline diamond, a way of fusing small seed diamonds together to make a singular ‘wafer’, and the diamond crown has been grown to the exact shape specification required. Neither of which are possible with mined diamonds.

“With lab grown diamonds you can dare to do things that you wouldn't have dared do with natural diamonds,” said Edouard Mignon, chief innovation officer at TAG Heuer. “Diamonds grow with a CVD technology, chemical vapour deposition, and the beauty of it is that it grows atom-by-atom and layer-by-layer. So that means that you can have rough diamonds in whatever shape.”

It may seem like a novelty but the watch is more than a concept piece. Mignon says TAG Heuer has already received orders, despite the fact it is rumoured to be the brand’s most expensive creation to date and was only unveiled on 30 March.

The mobile phone made the need to own a watch obsolete, but these watchmakers are embracing technology to make luxury timepieces more desirable than ever.

What is the EU's new Digital Markets Act and how will it affect you?

From hotels to watches: the surprising versatility of a hospitality degree