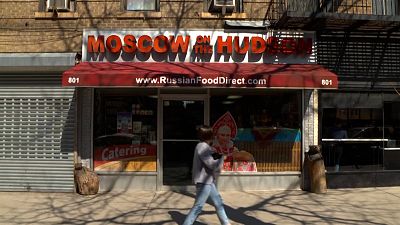 People are pouring out vodka, boycotting Russian restaurants and some are even leaving threatening voicemail messages to Russian businesses.

Angered by the deadly violence and the humanitarian crisis from Russia's war with Ukraine, some are dumping their frustrations on Russian businesses and brands.

Business owners say it's the most intense anti-Russian sentiment they've ever seen, but they call the behaviour irrational and misplaced, as most denounce Russian President Vladimir Putin's invasion, and many owners are not even Russian.

A new obstacle after COVID

Tigran Elchyan, chef and owner of Kalinka Russian Cuisine, a restaurant in Glendale, California, said he has received threatening calls a couple of times a week since the war in Ukraine started from people he says sound American.

Yet, Elchyan, like a large number of Glendale residents, is Armenian-born, and his restaurant highlights food not only from Russia but from his native country as well as former Soviet nations like Georgia and Kazakhstan.

"Business down a little bit like 30 to 20 percent down, but we got through, we got through COVID," said Elchyan. "It's not going to be a big, big deal."

A slowing down of Eastern European exports

Moscow on the Hudson, a specialty store in New York's Manhattan that sells Russian, Ukrainian and other international products, has also received strange calls from people using expletives about Russia, and requesting the store owners ask Russian President Vladimir Putin to stop the war.

But Gleb Gavrilov, who is Russian, Polish and Greek and runs the store with his Kharkiv-born mother, says he's mostly worried about the impact of the war on Eastern European exports, which have slowed due to the invasion and a litany of sanctions on Russia.

"If you're a normal person, 90 percent, you know, we understand. We all live here, we escaped all this madness there. And you know, we'll all get along. Everybody supports me," said Gavrilov.

The majority of the store's products come from Russia and Ukraine.

Gavrilov said the Brooklyn-based distributors he buys from are already warning supplies could run out.

And customers are rushing to buy more Ukrainian-made chocolates, Russian cereals and other products while they still have the time.

Ukrainian and Russian opera stars in emotional embrace after a show